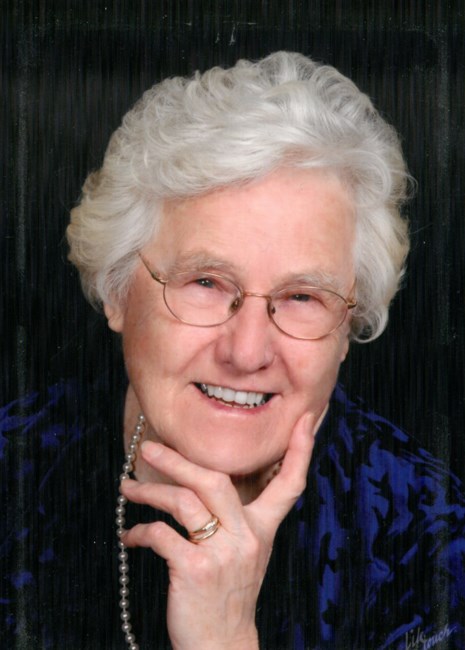 GEE, Edna Catherine It is with deep sadness we announce the death of Edna Catherine Gee (nee Wettlaufer) on January 20th in her 101st year. Edna passed away at her home in McGarrell Place, with her daughters able to be with her. Edna is survived by her daughters and sons-in-law Sheila & Radon Lui and Linda & Phil Pace, her grandchildren Kevin & Erika Lui, Christina & Dion Steenkist, Joanna Lui and Tamara Pace, her great-grandchildren Sara, Julianna, Harrison and Dustin (Meghan), her sister-in-law Bernetta Wettlaufer and her many loved nieces and nephews. She was predeceased by her beloved husband of over 65 years, Les, her grandson Jason Pace, her parents Enoch & Laura Wettlaufer, her sister and brother-in-law Doreen and Derryl Moore, and her brother Roy Wettlaufer. Edna was born on the family farm at Neustadt in 1922 and lived in that area until the age of 15 when her family moved to Kitchener. After her marriage to Les in 1944 they were stationed by the RAF in Nova Scotia then in England and Wales. They returned to Canada in 1947, settling in London and later spending summers at their cottage at Port Loring. They loved to travel, and made trips to England, Europe, Australia, New Zealand, South America and India. They lived for two years in Jamaica and for seven years in Lesotho where they served as missionaries of the United Church of Canada. Edna was an active member of Colborne St. United Church, serving as president of the UCW, member of the board, mission advocate and archivist. She was a talented seamstress, made beautiful quilts and was a charter member of the London Embroiderers’ Guild. She was an avid reader, a lifelong learner and loved researching the family genealogy. With a deep care and concern for those around her, Edna loved her family and friends, was blessed with a talent for making friends wherever she was and maintained contact with them throughout the years. The family wishes to thank the staff at McGarrell Place for their kind and loving care. Cremation has taken place and a memorial service is planned for Saturday April 22 at 2 p.m. with visitation 1 hour prior to the service, (service will be live streamed). Arrangements are entrusted to Needham Funeral Service (520 Dundas St.). Memorial donations would be welcome to the United Church of Canada Mission and Service fund or to the Alzheimer Society Southwest Partners. Tributes may be made at www.needhamfuneralhome.com
See more See Less

In Memory Of Edna Catherine Gee