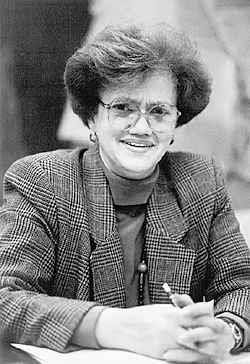 Shirley Ann Mathis (McBay) was born in 1935 in Bainbridge, GA, the daughter of Annie Bell Washington (Stevens Williams Pringley). She attended Hutto Elementary and excelled in Mathematics early on (including beating older students in Math competitions). She graduated from Hutto High School at age 15. From there, she attended Paine College in Augusta, GA, which she graduated as a Chemistry major at age 19. She immediately attended Atlanta University where she earned Masters degrees in both Chemistry and Mathematics. After marrying Professor (of Chemistry) Henry McBay and starting a family, she began pursuing a Ph.D. at the University of Chicago but transferred to the University of Georgia to be closer to home. At UGa, she became the first Woman to earn a Ph.D. in Mathematics and the first African-American to earn a Ph.D. of any kind at the school. She was Professor of Mathematics at Spelman College for many years and also served in the Administration, ultimately rising to be Chair of the Division of Natural Sciences. In 1975, she began working for the National Science Foundation in Washington, DC reviewing grant proposals. In 1980, she became Dean of Students at Massachusetts Institute of Technology (M.I.T.) in Cambridge, MA where she spearheaded an institution-wide self-study of the obstacles Minority students were having in allowing them to be successful. From that report came recommendations that led to the creation of the QEM (Quality Education for Minorities) project at M.I.T. In 1990, she left M.I.T. to found QEM Network in Washington, DC for which she served as President to further the aims of promoting the achievement and development of Women and underrepresented Minority students, faculty and institutions nationwide. She retired in 2016 and moved to Las Vegas, NV as the housemate of her lifelong best friend, Audrey Forbes (Manley). In 2018, due to deteriorating health, she moved to Los Angeles, CA and lived with her first son, Michael McBay. She died peacefully on November 27th.. She was 86. She is survived by her eldest son Michael McBay of Los Angeles, CA and her youngest son Ronald McBay of Atlanta, GA and "the daughter she never had" Laura-Lee Davidson of Washington, DC. Condolences may be left down below. In lieu of flowers, please consider making a donation in Shirley's name to the QEM Network (link below).
See more See Less