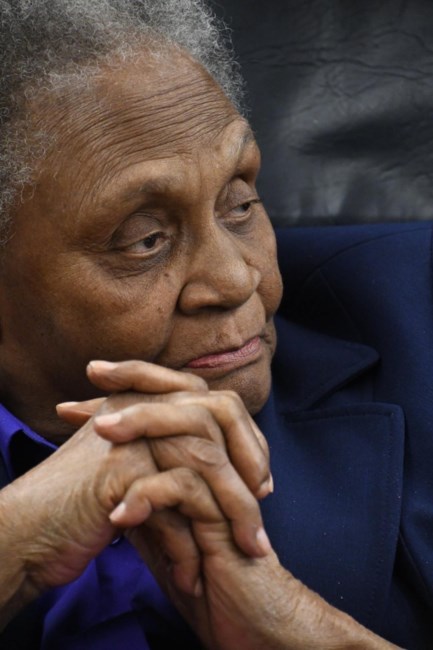 Mrs. Mary Helen Sears Campbell was the eldest child born to Mrs. Mary Emma Jackson Sears and Mr. Thomas Sears, Sr. on February 11, 1930. She grew up in Frankfort, Kentucky and graduated from Mayo Underwood High School. She continued her education at Western Kentucky Vocational School, where she received a Certificate in Secretarial Science. It was there she met and later married the late Walter Campbell, Sr. From this union she had five children. Mrs. Campbell, as she was respectfully known, was a longtime employee of Kentucky State University, was an entrepreneur insurance saleswoman, Secretary for the Kentucky Division of Pardons and Paroles, Division of Plumbing and Small Business Administration. In her retirement, she also worked as a Teaching Assistant at Rutherford Elementary School in Louisville Kentucky. She was a member of First Baptist Church in Frankfort, Kentucky and was always willing to help family, friends, and those in need. Though she held numerous professional roles, she was best known for delighting everyone she knew with her amazing culinary skills. She was a self-taught etiquette expert and master chef. She provided love and comfort to many through her delicious dishes, gatherings, and parties she hosted. The extravagant dinners she hosted for family and friends are famous. She had a delightful dry sense of humor. She also had various hobbies and interests. She was a former league bowler. She was an avid reader and dog and bird lover. She loved traveling on trips with her family and in her later years became an expert at word search puzzles. Above all she was a loving and dedicated mother and refined southern woman who always comported herself with honor, dignity. and grace. She was a blessing to all who knew and loved her. Though she will be dearly missed, the gifts her beautiful soul leaves with us are timeless and more valuable than gold. Mrs. Mary Helen Sears Campbell is survived by her children - Renee, Walter, William and Valeria and Carolyn, 14 grandchildren, 7 great grandchildren, many nieces, nephews, great nieces, great nephews, cousins. and a host of friends. She is preceded in death by brother Thomas Sears, Jr., sister Beatrice Sears Hocker and her parents.
See more See Less