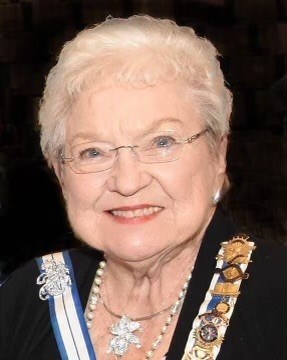 Edwina Ann Hall Beall – Macon, GA – Edwina Ann Hall Beall, age 90, passed away Tuesday, September 20, 2022 peacefully surrounded by all her family. A visitation will be held at St. Andrews Presbyterian Church, 501 Bass Road, Macon GA on Thursday, September 22, from 5:00-7:00PM. The family will have a private burial Friday in Riverside Cemetery. A Celebration of Life will be held at Snow’s Memorial Chapel, 1419 Bass Road, Macon GA 31210 on Friday, September 23, 11:00AM. The Reverend Curtis White will officiate. Mrs. Beall was born in Ft. Lauderdale, FL, to Edwin Gordon Hall and Annabel Smith Hall. She was educated in Florida graduating from Ft. Pierce High School. She was a proud graduate of Wesleyan Conservatory, Macon GA with a Bachelor of Fine Arts. During college she met and later married the love of her life Dennis John Flanagan Beall. Together they raised 2 daughters. Mrs. Beall proudly called Macon her home since 1949. After college she worked as a bookkeeper at Southern Chemical Co in Macon, owned a Consignment store, Stratford Academy volunteer mom, and worked in local gift boutiques including Fancy That, The Mole Hole, and Steve Popper’s. Her favorite job was at Stein Mart where she received an honor as their oldest Boutique Lady, employed for 10 years working well into her 80’s. She was a founding member of St. Andrews Presbyterian Church, PCUSA and served several terms as an Elder. She was a devoted member of the National Society Daughters of the American Revolution for over 60 years, and the most senior Honorary State Regent having served 2 terms as State Regent of the Georgia State Society. It was her great joy to present the DAR Good Citizen and American History awards annually at Stratford Academy and Mt.deSales. Genealogy was a passion and she held membership and elected office in numerous historical societies including United Daughters of the Confederacy, National and Georgia Society Daughters of the Colonial Wars (past State President), Continental Society of Indian Wars, Magna Charta Dames and Barons, Dames of the Court of Honor, Colonial Dames of the XVII Century, Bench and Bar, among others. Civic organizations included the Loaves and Fishes Ministry where she served as a Board member since her “near death experience” in 2008. It was her promise to God to help serve the underserved. She enjoyed her friendships through the House and Garden Club, Macon Elks Club, and a Bridge Club that began together nearly 60 years ago. Heaven will be brimming with beautiful flowers and bridge teas. Mrs. Beall is preceded in death by her parents, Edwin G. & Annabel Hall; sister Margaret Hall Hearn; aunt Margaret Smith Thomas (Frederick); uncle James Augustus Smith (Marguerite); in-laws Holst C. & Mary Lou (Polly) Beall, Sr., Holst Clay Beall Jr. Mrs. Beall is survived by her 2 daughters and husbands, Denise and James Fritze of Macon GA, Margaret and Jeffrey Cohen of Alpharetta GA; four grandchildren, Jimmy Fritze of Macon GA, Maggie Fritze Graham (Mason) of Macon GA, Morgan Cohen of Alpharetta GA, Thomas Cohen (Abby) of Roswell GA; sister-in-law Vida Beall of Macon GA; one niece, Sharon Hearn Gray (Jim) of Orlando FL; three nephews and families, Gordon and Char Hearn of Sarasota FL, Jim (Ann) Beall of Macon GA, Holst (Patricia) Beall, III of Suwanee GA; several great nieces and nephews. She was excited for her first great grandson expected in January 2023 to Maggie and Mason Graham. The family wishes to express appreciation to the staff of Magnolia Manor, her home since August 2021, for their love and support. In lieu of flowers, donations may be made to Loaves & Fishes Ministry, 651 MLK Jr Blvd., Macon GA 31201 or to the donor’s favorite charity. Visit www.snowsmacon.com to express tributes. Snow’s Memorial Chapel, Bass Road has charge of arrangements.
See more See Less