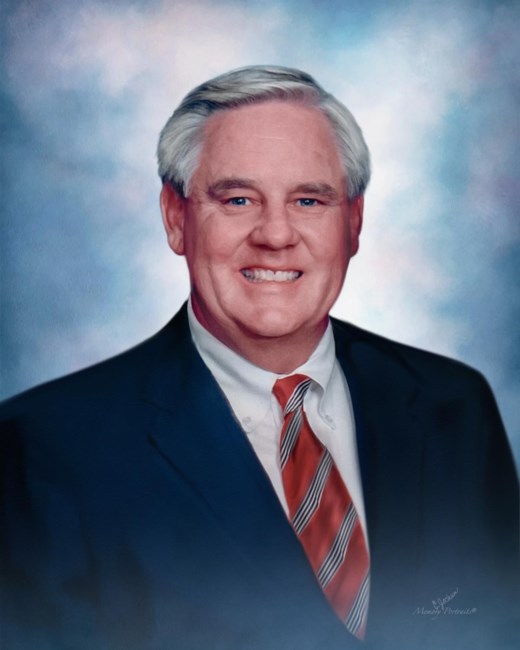 James Romney Tucker of Macon, died July 25 at his residence. A lifelong resident of Macon, he was born on April 24, 1943 to the late Catherine Thompson and Paul Chambliss Tucker. He graduated from Lanier High School, where he was a member of ROTC, the football team and Phi Omega Beta fraternity. He graduated from Mercer University in 1964, where he was a member of Sigma Alpha Epsilon, and Mercer University Law School in 1967. It was there he met his wife of 55 years, Marilyn Maag of Atlanta, Georgia. Also while at Mercer, he began working as real estate agent commencing a career of more than 60 years in the real estate profession alongside his parents and later one of his sons at Tucker & Tucker Realty Company. He also served as President of the Macon Board of Realtors and Macon MLS. He loved any opportunity for fellowship with neighbors and friends and was a lifelong member of First Baptist Church. He was also active for many years in the Macon Exchange Club, Macon Lions Club of which he served as President, Idle Hour Country Club, AMFICO, and a participant in countless breakfast club gatherings around town. He is survived by his wife Marilyn M. Tucker of Macon; sons James R. Tucker, Jr. (Kirstie) of Washington, D.C. and C. Douglas Tucker of Brunswick, Georgia; grandchildren Lacy Tucker and Carter Douglas (“Tuck”) Tucker, Jr. of Brunswick and Louise Tucker of Washington; brother Paul C. Tucker, Jr. (Bette) of Charlotte, NC; sister-in-law Laura M. Matthews (Whit) of Macon and several cousins, nephews and a niece. Reflecting his loyalty and fidelity, Romney served as a caregiver over many years to each of his parents as well as his wife. The family wishes to acknowledge the support provided to Romney in his role as care giver, including: Brenda Burnett, Cheryl McBride, Kim Powell, Chelsey Rouse, Kim Spain, and Debbie Worthington. A Private Graveside Service will be held Saturday, July 30, 2022 in Riverside Cemetery, North Gate Section. Rev. Scott Dickison will officiate. The family will have a Public Visitation from 11:00 until 12:00 Noon Saturday, July 30, 2022 at Snow’s Memorial Chapel, Cherry Street. In lieu of flower, the family requests contributions be made to First Baptist Church, 511 High Place, Macon, Georgia 31201; Lions Club International, 300 West 22nd Street, Oak Brook, IL 60523; or the American Heart Association, 7272 Greenville Ave. Dallas, TX 75231. Visit www.snowsmacon.com to express tributes. Snow's Memorial Chapel, Cherry Street, has charge of arrangements.
See more See Less