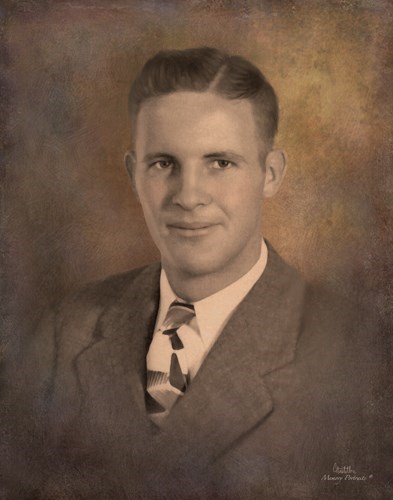 Mr. Mac Grace, beloved husband, father and grandfather, passed away on Sunday, November 22, 2015. Mac was born April 18, 1928 in Hacoda, Alabama to the late Millard Filmore Grace and Anna Pearl Judah Grace. A firm believer, Mac was a long-time member of Liberty United Methodist Church of Macon, Georgia. Mac served as a faithful member of Liberty’s Administrative Board and dedicated many years to teaching Sunday School, working with Youth and becoming a true Bible Scholar. He routinely accompanied his wife, Elizabeth to listen as she practiced as church organist and proudly listened to her play every Sunday morning, seated with family. Mac answered the call to serve his country during World War II, leaving his home in Oglethorpe, Georgia at age 17 with the U. S. Navy to head to the Pacific Theater. On his return from the Pacific, Mac attended Georgia Southwestern’s School of Business. On June 5, 1945, he then began what became a life-long career with the old Central Georgia, then Southern Railroad and ultimately, Norfolk Southern Railroad. A true “railroad man,” Mac’s railroad career spanned 46 years. A freight agent, he served on the prestigious Railroad Safety Committee for many years and finally retired with a stellar and extremely rare, perfect record. Mac’s true calling, however, was as husband, father and grandfather. He fell in love with his wife, Mary Elizabeth Stokes Grace, at first sight and the two were married at Liberty United Methodist on July 22, 1950. The two recently celebrated their 65th wedding anniversary with friends and family at Sea Island, Georgia. Mac was the proud father of three, Mac (Jan) Grace, Ginny (Peter) Lycurgus and Nancy Grace (David Linch). He spent a lifetime devoted to his family, raising his three children and seeing them through college and graduate schools, but was happiest to become a grandfather to six, Sam and Dan Grace, Catie and Tim Lycurgus and twins, John David and Lucy Linch. Mac was always the life of all gatherings. He loved landscaping his family home, creating beauty year-round and winning Home of the Month from the Middle Georgia Realtors’ Association and Middle Georgia Garden Club multiple times. He loved to dance anything from jitterbug to ballroom to square-dancing. Mac cheered the Alabama Crimson Tide to many Championships. He was keenly interested in politics and current events and always had a strong opinion. Although traveling extensively, Mac’s favorite place was home, where he will be missed very, very deeply. Visitation with friends and family will be held at Snow’s Memorial Chapel, Pio Nono Avenue on, Tuesday, November 24, 2015 at 6:00 p.m. Mac’s funeral service will be held at Liberty United Methodist Church at 6511 Houston Road, Macon, at 12 Noon on November 25, 2015. The Rev. Wayne Anthony, Dr. William W. Oliver and Mr. Carl Puckett will officiate. An in-church visitation will be held 1 hour prior to the service. In lieu of flowers, the family suggests memorials be donated to the Upward Bound Athletic Program Scholarship Fund at Liberty United Methodist Church in Mac’s name. Mac Grace will be missed by those that loved him each day. Visit www.snowsmacon.com to express condolences. Snow’s Memorial Chapel, Pio Nono Avenue has charge of arrangements.
See more See Less

Funeral Service and A Celebration of His Life