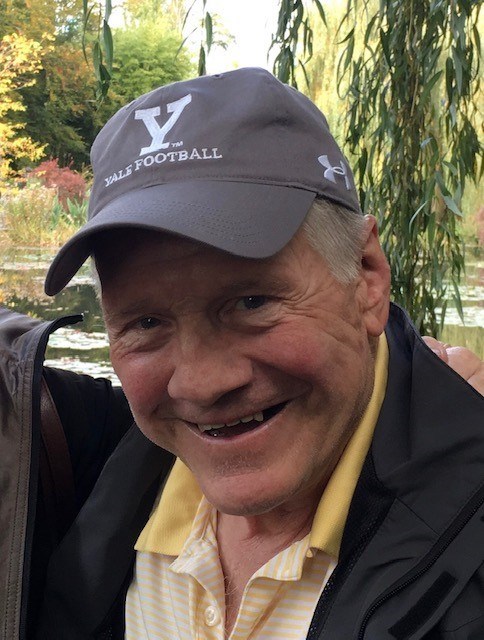 David Darryl Kelley of Madison, age 76, passed away on July 20th after a long illness with Alzheimer’s disease. He died at home surrounded by his loved ones. David was born on November 1, 1943, in Troy, New York. He was the son of Alva and Martha Kelley. He is a graduate of the University of Massachusetts where he lettered in three sports – football, lacrosse and wrestling. He met his wife Barbara there. Upon graduating in 1966 he stayed on as the freshman football coach for five years. He then spent three years coaching at Allegheny College in Meadville, PA before going in 1972 to Yale University as an assistant joining Coach Carm Cozza. David was someone who truly made a difference, positively impacting hundreds of lives. He was a beloved mentor and father figure to more than thirty years of student athletes. His intense, competitive personality along with his principles, values and stalwart moral compass left a positive mark on all those he came in touch with. Upon retiring from Yale in 1996 he started a new career in home building and built several homes in the area. After retiring from building he became an avid gardener and transformed his yard into a beautiful haven. He was a big part of building the Greenway Trail at Hammonasset State Park. During their life together David and his wife enjoyed travelling. When home he loved watching sports on TV, especially football, both college and pro, and the UCONN Women’s basketball team. He is survived by his wife of 54 years, Barbara; daughter Beth Levis and son-in-law Michael Levis of Madison and their four children Will, Kelley, Jillian, and Claire; son David John Kelley and his wife Catherine Kelley of San Francisco and their three children Mick, Gabriella and Pilar; his sister Sandra Compisi of Chicago and his brother Timothy Kelley of Rochester; brothers-in-law Frank Esielionis, David Esielionis, Steve Esielionis and Michael Esielionis and their wives; and many nieces and nephews. His core values of integrity, perseverance, giving back and living life by “The Golden Rule” will carry on as his legacy through his remaining family members. There will be a small family service at their home and as soon as Covid-19 is over a gathering to celebrate his life. He lived his life full of joy and love for family and friends; and he endured his illness with courage and grace. He will be deeply missed by so many. Dave Kelley was a good man who truly made a difference! We request that any donations in David’s name be given to CT Hospice or the Strong House in Madison.
See more See Less

In Memory Of David D. Kelley