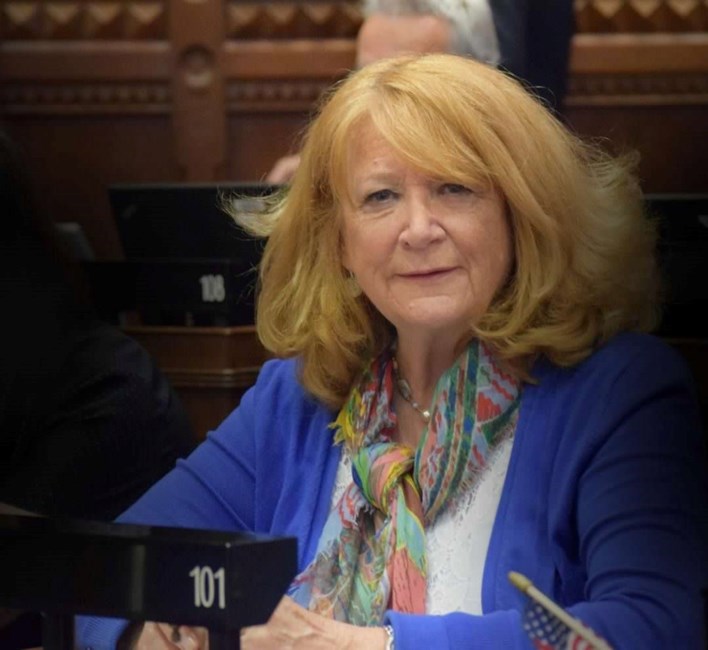 Former State Representative and community leader Noreen Mary Kokoruda passed away on Wednesday, December 21st in New Haven after a long and courageous battle with thyroid cancer. She was 75 years old. Considered a consummate public servant, Kokoruda was a devoted wife, mother and grandmother who was beloved by her family and her community, having served in innumerable roles throughout her life. Noreen was born on August 4th, 1947 in Bridgeport CT to US Navy Veteran Victor Swaller and her mother Eileen Swaller (O’Brien). The second oldest of 7 children, Noreen was known even at an early age for her extroverted personality and her passion for helping others. She remained extremely close to all of her brothers and sisters throughout her life and took a keen interest in the lives of her nieces and nephews and was considered the matriarch of her entire extended family. Noreen grew up in the Lordship district of Stratford, Connecticut and attended Notre Dame HS in Bridgeport CT where she played basketball, field hockey and was a member of the student council, her first foray into a lifetime of community and political service. After graduating from Notre Dame in 1965 she matriculated to Good Counsel College (Pace University) in White Plains, New York where she played field hockey and was class president her senior year. Soon after graduation she married the love of her life, Daniel Peter Kokoruda of Bridgeport, and the two moved to West Haven, CT and started a family. They had a son Brett, born in 1970 and a son Shane, born in 1973 and spent 8 idyllic years in West Haven before ultimately moving to Madison in 1978 where she would spend the rest of her life. Her life in Madison was the stuff of local legend. Deeply beloved by the entire community, she made an impact across multiple generations, touching many lives. As a younger mother in the 1980s she worked tirelessly as a volunteer, PTO member, athletic booster and even as a substitute teacher for a number of years where she was affectionately known as “Mrs Koko”. After the graduation of her two sons from Daniel Hand High School she began a stretch of public service that was truly remarkable. She spent 10 years on the Beach and Recreation commission, served for 14 years on the Board of Selectman as an elected official, played an instrumental role in the formation of Madison youth lacrosse and was the Senior Director of the Shoreline Foundation for many years, running countless community programs and taking the lead in the construction and development of the Aqua Dome in town. In later years, Noreen was also a Justice of the Peace who officiated countless weddings for local residents. Noreen’s political accomplishments reached their pinnacle when she was elected as a State Representative in the 101st District, serving Madison, Durham and Guilford. It was her decade in Hartford that she personally considered to be her most impactful, and she quickly developed a reputation as both an effective and savvy legislator as well as a moderate and sober voice who regularly reached across the aisle when she knew it would benefit her constituents. Her final years in Hartford coincided with her cancer diagnosis, and she courageously pushed forward even winning a re-election bid in 2018 in the middle of a debilitating cancer treatment that left her without a voice for much of the campaign. A fighter until the very end, after her stint in Hartford she was again re-elected to the Madison board of selectman and was contributing on a town meeting call just the day prior to her passing. On a personal level, Noreen was an athlete her entire life. An avid tennis player and golfer, who loved spending time with her friends playing cards and attending dances at the Madison Beach Club. She took great pride and interest in Madison town sports and was known for attending every game her sons and grandkids competed in. She also traveled extensively in Europe and throughout the US with her husband and family and spent her most memorable weeks vacationing on Martha’s Vineyard with her entire extended family. She is survived by her husband Daniel Kokoruda. Her sons Brett and Shane. Their wives Jennifer and Sharon, her five grandchildren, Riley, Jacob, Cecily, Karleigh and Lucy, and her five bonus grandchildren MacKenzie, Reagan, Aidan, Reese, and Kieran, who affectionately called her “Nan”. She is also survived by her siblings, Eileen Patricia, John, Victor, Kathleen, Ann, Brien and her many beloved nieces and nephews on both her and her husband’s side of the family. She is predeceased by her mother Eileen, her father Victor and her sister Michele. A wake will be held in her honor on Friday January 6th between the hours of 4pm and 8pm at Swan Funeral Home located at 825 Boston Post Road, Madison CT. There will be a Catholic funeral service the following day at St Margaret’s Parish in Madison, CT, Saturday January 7th at 10am.
See more See Less

In Memory Of Noreen Kokoruda