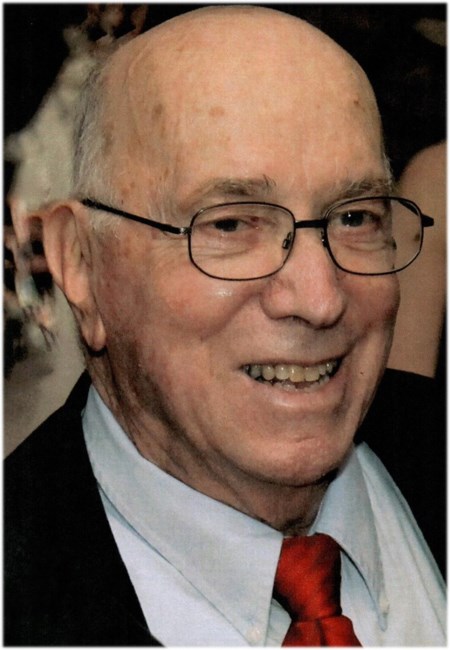 Eugene “Gene” Kome, of Warren, Michigan, passed away peacefully on January 15, 2022, at the age of 89. Devoted husband of Marjorie (nee Codd) of 67 years; cherished father of Eugene (Kathy), Jan (Warren) McIntyre, and Linda (Robert) D’Orazio; beloved grandfather to Lauren (Jeremy) Bennett, Andrew Kome, Palmer D’Orazio, Ryan McIntyre, and Kevin McIntyre. Gene was born in Middletown, New York, to Idah Bricker and Samuel Kome, who both immigrated to America from Russia when they were children. Gene graduated from Michigan State College, where he met his bride. They raised their family in Madison Heights. As a member of the Lamphere School Board, Gene was proud to present diplomas to all three of his children. Gene worked most of his career at Chrysler Corporation in Internal Audit. Upon retirement, he joined the volunteers serving at the Chrysler Museum and the company exhibits at the Woodward Dream Cruise. An avid Spartan fan, Gene had season tickets to Spartan football and attended many bowl games, including the 1988 Rose Bowl. He was also a season ticket holder for women’s basketball, and a Spartan Marching Band Fan. And he attended MSU’s Grandparents University with Ryan and Kevin. Travels took Gene and Marj to every state, and nearly every National Park, chasing trains along the way. They made three epic trips to Alaska by motorhome, fifth wheel, and cruise ship. They also toured Europe and China, and saw polar bears in Churchill, Manitoba. For twenty years, Gene & Marj made the I-75 trek “Up North” to their home in Clare, on the wooded shores of Five Lakes. In their square dance days, they managed to squeeze in four or more dances a week, and the occasional National Convention. Gene’s model railroading hobby filled his retirement years, and his basement. He constructed an elaborate train layout, with stops named for his grandchildren, which was part of several NMRA club tours. One of Gene’s favorite volunteer gigs was as bus driver for the Marauders Drum & Bugle Corp. Eugene was preceded in death by his sister Lillian Abramson, and brother Harold Kome. Gene is also survived by nieces and nephews Penney Kome, Dylan Kome, Ronald Abramson, Robert Abramson, Jane Lynn, Jesse Kome, Sonia Handforth-Kome, Hunter Kome and Sam Kome. Gene also leaves behind many members of the Codd family, including Dennis Glander (the late Patricia), Joan Mannino, George (Sue) Codd, John (Rosemary) Codd, Susan (Lee) Scherwitz, Robert (Sylvia) Codd, Carol (Jerome) Roszka, Marilyn (George) Gilin, and dozens of nieces and nephews. Gene will also be missed by his dear family at The Masters, Ram’s Horn, and Salvatore Scallopini. Visitation will be held Friday, January 21st, from 4 to 8, at Edward Swanson & Son Funeral Home, 30351 Dequindre Road, Madison Heights, MI 48071. A Funeral Celebration of Life will be held Saturday, January 22nd at 11 a.m. at the funeral home, with visitation from 10:30 until the time of the service. In lieu of flowers, the family suggests memorial gifts to MSU Eli Broad College of Business, or Salvation Army.
See more See Less

In Memory Of Eugene R. Kome