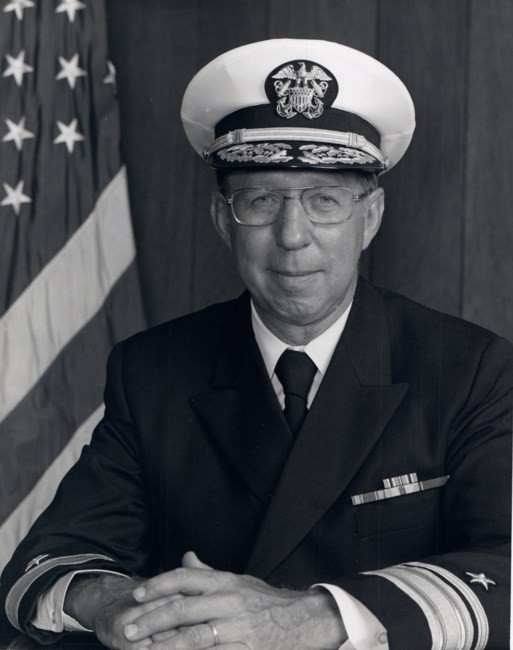 Nelson Heyer, age 97, of Waretown, New Jersey passed away on Wednesday, January 18, 2023. A visitation for Nelson will be held Friday, January 27, 2023 from 2:00-4:00 pm and 7:00-9:00 pm at Thos. L. Shinn Funeral Home, 10 Hilliard Drive, Manahawkin, NJ 08050. A Mass will be held Saturday, January 28, 2023 from 11:00 am to 12:00 pm at St. Mary of the Pines, Bishop Lane, Manahawkin, NJ 08050. Committal Service will be held Monday, January 30, 2023 from 11:00 am to 11:30 am at Gate of Heaven Cemetery, 10 W. Stevens St., Hawthorne, NY 10532. Fond memories and expressions of sympathy may be shared at www.shinnfuneralhome.com for the Heyer family. In lieu of flowers, the family has suggested that donations be made to the St. Mary Academy, the parish school in Manahawkin, NJ. (go to www.stmarybarnegat.com follow the link to “on-line giving,” select “other” and complete the memo field to designate the school.) WARETOWN RADM Nelson O. Heyer, USN, Retired, was born on February 10, 1925 in Rochester, NY to Otto and Rose Heyer. He was an enterprising and ambitious youth working multiple jobs during the depression and attaining his Eagle Scout rank at an early age. He began college at the University of Cincinnati. With the onset of WW II, he volunteered for the US Navy and was selected for the Navy V-12 Officers Training Program at Union College. He served as an engineering officer on the USS General J. H. McCrea (AP-149) and USS Cadmus (AR-14) before returning to complete his degree in Electrical Engineering at Union in 1947. That same year, he left active service, joined the IBM Corporation and embarked on a 39-year career while earning his Industrial Management in Industrial Engineering from Stevens Institute of Technology in 1951. In the early part of his IBM career, he was in field engineering in NYC and design, manufacturing, and test engineering in the Mid-Hudson Valley. He transitioned into Human Resources and joined the Corporate Staff in 1961 initially in NYC, and then, at the Armonk headquarters until his retirement in 1986 as Human Resource Director. He was the direct hiring manager for 3,500 employees and led many innovative programs on the corporate level as the workforce grew to 400,000. For over 30 years, he was on teams that selected IBM plant locations throughout the US and internationally as well. On the planning level, his group developed and implemented the programs to maintain IBM’s commitment to equal opportunity and full employment. In parallel to his IBM career, Admiral Heyer (ret.) had a distinguished career in the Naval Reserve leading award winning units that supported the Navy as part of the Naval Security Group and the Navy Bureau of Personnel. He had the distinction of being the first flag officer to be selected for the Navy’s cryptologic service and retired in the dual capacity as the senior reserve flag officer for the National Security Agency in Fort Meade, Maryland and as CINC Naval Security Group (Reserves) in Washington, DC. He took pride that throughout his career his reserve efforts contributed directly to the defense of the nation including monitoring foreign communications during the Cold War and assisting the Bureau of Personnel in modernizing its personnel manual, record keeping and data systems. After retirement from IBM, Nelson formed Heyer Associates, a human resources consulting firm serving corporate clients throughout the country. He was a Fellow of the Human Resource Institute of Boston University and Visiting Professor of Labor & Industrial Relations at the University of Illinois, Champaign. He also co-chaired the “New York State Public Workforce in the 21sh Century,” sponsored by the Rockefeller Institute of Government. Nelson was predeceased by his sister Evelyn and his wife of 52 years, Nora Frain Heyer who herself was a cryptologic officer in WWII working on deciphering enemy codes as part of OP-20GY. Together they had four children, Jane Price (and the late Eric), Anne Dremluk (Donald), Susan Brunner (Paul) and Thomas Heyer (Debbie). Nelson had nine grandchildren and five great-grandchildren. He is also survived by many nieces and nephews. For the last twenty years, he has enjoyed the companionship of his dear friend, Nancy Valvano. Throughout his years, Nelson was active in his community. He was a Commander of American Legion Post 52 in Scarsdale, NY, served on the Memorial Committee and spearheaded the development of the Memorial Garden on Mamaroneck Road. He was Vice Chair of the Naval Order of the United States, plank holder of the Southeast Florida Commandery and member of the Investment Committee. He was troop leader of Scarsdale Boy Scout Troop 60 and continued his commitment to the Boy Scouts serving on Boards of Review and as Grand Marshall of the Scarsdale Memorial Day Parade for several decades. He was also a dedicated alumni volunteer for Union College serving as a class officer and fundraiser. He was awarded the Union Outstanding Engineering Alumnus Award in 2014. Nelson was an avid fishermen and investor, with many hobbies including boating, sailing, clamming, skiing, reading and traveling. He had a passion for helping others and an adventurous spirit. Most of all, he enjoyed family time, friendships, sharing stories and his role as Papa and Uncle Nelson. In addition to his Waretown home, he also had homes in Barnegat Light, NJ and Boca Raton, FL. He was a long-time resident of Scarsdale, NY, where he raised his family.
See more See Less

In Memory Of Nelson Heyer