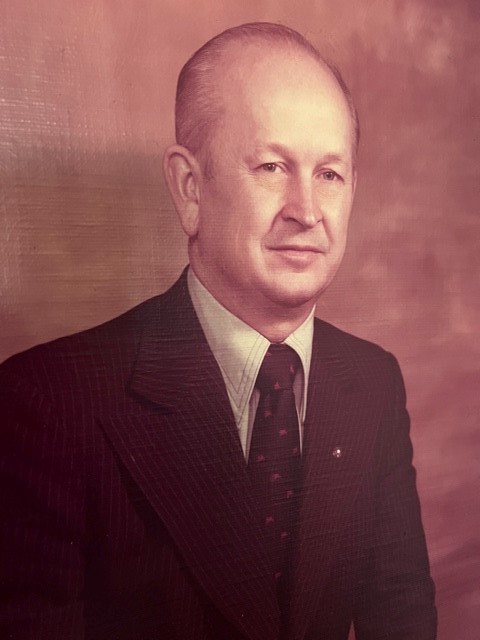 James Billington Fox, born June 9, 1927 in Fort Worth, Texas lived 93 prosperous years. James was preceded in death by his father and mother, Maurice and Mary Fox; his brother, Maurice Fox Jr and sister, Jeanne Morgan. James married his high school sweetheart Cleta Mae (Skeeter) Russell on July 1st, 1944. Together they has 65 wonderful years of travel, enjoying their two favorite pastimes of golfing and playing bridge, and entertaining friends and family. James and Skeeter had two boys, James Carl Fox, who was killed in Vietnam, and Larry Mason Fox of Austin, Texas. He was the proud grandfather to James David Fox and Kristi Kim Fox both of Austin Texas. After Skeeter’s passing, James married Barbara Briggs in 2013 and the enjoyed each other’s company by traveling and playing bridge. Professionally, after graduating from Meadow High School in June 1944, he served in the United States Navy fighting for his country in WWII. He then attended Baylor University on the GI Bill where he played baseball as first basemen and graduated in 3 years. He went on to work for Magnolia Petroleum Co., later Mobil Oil and he retired as President of Mobil Oil Credit Corporation in 1996. He served as chairman of the Board of Directors for Analysis and Technology (founded by his brother Maurice) from 1992-1997. Also, James was appointed to the National Postal Forum. James chose to retire to Horseshoe Bay, Texas with a summer home in Ruidoso, NM where he continued fulfilling his passions for golf, bridge, cruise vacations and travel. He was active in his community by serving in clubs, he was also a participating member of the Freemasons. In addition to his hobbies, James was an avid sports fan. His favorite teams were the Baylor Bears, Kansas City Chiefs and Kansas City Royals. James will be remembered as an exceptional provider for his family. James put family first and showered generosity on all those near to him. He loved his children and grandchildren deeply and empowered them to achieve great things.
See more See Less

In Memory Of James Billington Fox