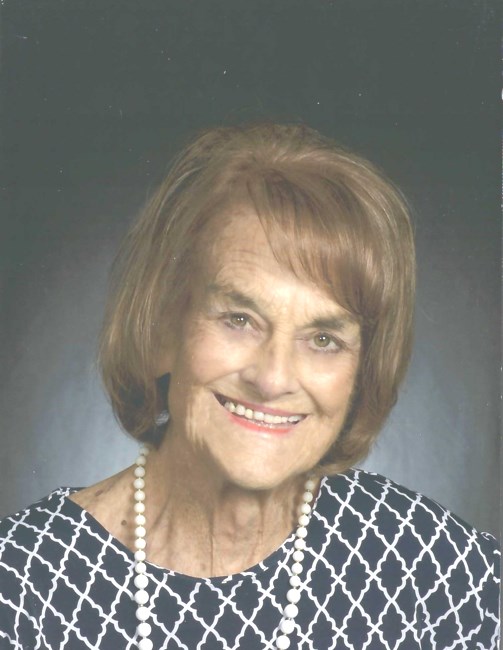 Jean (Lei Lani) Jensen Anderson was born in Hilo, Hawaii and lived the first nine years of her life on a sugar plantation where her father was the only doctor. Jean is preceded in death by her parents Dr Joe and Aime Jensen, brother Dr. Joe Jensen, grandson Blake Anderson and her beloved husband, Ken Anderson. Jean attended a private girl’s school, Marborough, in Los Angeles and graduated from Northwestern University in Evanston, Illinois. She often joked about receiving her BS and MRS degrees the same year as she and Ken were married during their senior year of college due to Ken having to join the Army during the Korean War. Through the early years of marriage, the family lived in southern California, then Lubbock, Dallas, Houston and Horseshoe Bay, TX.(the last, being the best move they ever made according to her) With each move, Jean immediately put her Social Work degree to action and jumped into community volunteerism. In Lubbock, she served on the Boards of the Symphony, Ballet, American Heart Association and Junior League. When in Dallas, Jean was instrumental in organizing and founding “Promise House” (a residential shelter for status offenders) in Oak Cliff. Jean was also involved in the development of “Letot Center”, a joint venture between Dallas ISD, the Dallas County Juvenile Department and the Dallas Junior League. Jean’s volunteer work focused on teen-agers regardless of their race, backgrounds and needs. State Board Memberships and Leadership roles included: Texas Coalition for Juvenile Justice, State Board of Symphony Auxiliaries, MHMR Children’s Advocacy Committee and MHMR Public Responsibly Commission, Houston Committee for Prevention of Child Abuse, and Dallas County Juvenile Services Advisory Committee. While in Dallas, Jean was presented and honored with “The Juvenile Justice Community Advocate Award” presented by the County Juvenile Board and Juvenile Department, “Outstanding Leadership and Dedication” award by the Dallas County Mental Health and Mental Retardation Center and the “Outstanding Contribution and Meritorious Service to the County of Dallas” award presented by the Dallas County Commissioner’s Court. While living in Horseshoe Bay, TX, some of her community involvements included serving on the Board of Directors of the Hill Country Theatre, Family Crisis Center, Board of the Highland Lakes Family Crisis Center, Member of the Highland Lakes Service League, Burnet County Republican Women’s Club, Burnet County Republican Club, South Llano Republican Women’s Club, Seton Associates of HSB, Highland Lakes Seton Associates, Seton Development Board in Austin, Baylor Scott & White Community Education Series Committee, and Baylor Scott & White Steering Committee for the building of the Marble Falls Hospital. She also served as an Advisory Board Member of the Highland Lakes Legacy Fund (part of the Austin Community Foundation), the Fund Development Chair for the Church at Horseshoe Bay to build the “Remembrance Garden, and currently, Jean was serving on the Development Advisory Board of Baylor Scott & White Marble Falls. Jean was awarded “One of the 10 Most Outstanding Women in Burnet County” by the Burnet County Women’s Forum, “Women in Distinction” in Central Texas by the Lone Star Girl Scout Council and “Tribute to Women” presented at the Republican State Convention. In 2013, Ken and Jean were presented the Highland Lakes Legacy’s “Philanthropic Award” for their time, gifts and talents to Highland Lakes Community. Jean loved life, loved to travel, loved her friends and most importantly, loved her family. Her family consists of three children: Ken, Jr. and his wife Beth Anderson of Dallas; Richard and his wife Michelle Anderson of Dallas, and a daughter Wendy and her husband Pat Blanchard of Plano. There are 4 surviving grandchildren: Chrissi and husband Chris Crampton of New York, Richard II and Monica Anderson of Dallas, Stan Hammond of Austin, Kyle Hammond of Charleston, SC. Jean has five great grandchildren, Maddie, CeCe & Savvy Crampton and Sofia & Leonardo Anderson. Jean also has 5 nieces and nephews. Jean created fun times and memories when the family would visit Horseshoe Bay and also planned and put together many family trips and experiences which they will always cherish. She felt very blessed in her life to have the love of her husband Ken of 66 years and their many memories and trips together. She leaves each of you with a wish for happiness and aloha. To honor Jean’s passion for helping women and children, memorials may be given to: Hill Country Children’s Advocacy Center Marble Falls, Highland Lakes Family Crisis Center Marble Falls or any charity of your choice.
See more See Less

In Memory Of Jean J Anderson