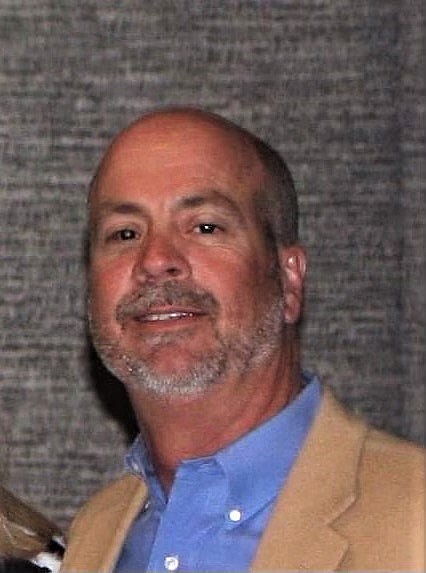 Rick Edwards went to his heavenly home on May 7, 2022. His family and close friends were with him, and they take comfort in the assurance that though he is absent in the body, he is present with the Lord Jesus Christ. Rick was born on May 5, 1965, in Las Vegas, New Mexico to Jerry and Carolyn Edwards. Their family moved to Marble Falls in 1968, a town Rick would dedicate himself to serving for the rest of his life. As a child, he rode his bicycle all over town, and soon came into his own in the family sport of waterskiing, including operating the first ski school on Lake Marble Falls. In high school, he played basketball and advanced to regional finals in tennis his senior year. Even then, he was a strong advocate for community, as he organized a ‘pickup truck blockade’ to protest the poor road conditions of the school’s driveway (While he suffered the punishment, the driveway was subsequently fixed!). After graduation in 1983, he earned a Bachelor of Science from Le Tourneau University. He worked at the Mansfield ISD, was a Director for the Texas Association of School Boards in Austin and was a Senior Manager for the Marriott Corporation. For the last 30 years and in partnership with his wife and dad, Rick has served over 400 public school districts and counties through the family business, Edwards Risk Management, Inc. His love for education prompted him to run for the Marble Falls ISD school board in 2009. With only a brief interruption, Rick served in this capacity for the rest of his life. All the while he enjoyed reading, praying, running with his dogs, and flying airplanes. Rick was defined by his passions. He was passionate about his family. He adored his wife Kim, whom he loved from his youth, and the life they built. They were married on May 30, 1987, which happened to be Kim’s birthday. He was so proud of both his sons, of Collin’s career as a pilot and Jared’s achievements as a student. And his parents were never far from his thoughts as he honored and served them. Rick deeply loved his friends and family and cherished all the memories he and Kim created with them, whether traveling afar or just hanging out at the ranch or lake. He was also passionate about his community, primarily the work of schools in the lives of children. He believed in investing in the well-being of children as individual human beings with hopes and dreams, as well as the systems that nurture safety and intellectual achievement. Rick valued greatly his work on the School Board and the work of making Marble Falls one of the greatest places to live and raise children. He served with the vision, “Children are the living message we send to a time we may not see.” Rick was equally passionate about the outdoors. He thrived in nature. When his cup was empty, God used the environment to fill his empty cup. Hunting, watersports, or just sitting around an open fire fed him emotionally and spiritually. Rick was also passionate about his career. He loved the people he worked with, thinking of them as part of his extended family. Business for him was not about the accumulation of profit, but rather the opportunity to serve the needs of others through long-lasting relationships and partnerships. Above all, Rick was passionate about The Lord, and it is impossible to understand Rick without recognizing the role his faith had in all he did. He served as a deacon at Fellowship Baptist Church, volunteered in the children’s ministry, and contributed as a key leader in administrative ministries. For Rick, these passions were all woven together throughout the fabric of his far-too-short life. They were not individual pursuits but bound together by love. Rick was greatly influenced by his grandmother, Euda Raley, who lived to be just shy of 105, and in a note found that he wrote to himself last year, well before his illnesses, he made a list of key influences upon him: God, folks, Brother Max Copeland, and Charles Hundley. He also referenced ideas, stemming from his abiding faith, in this note: they’ll know we are Christians by our love, He will become more and I will become less, find your calling, and let your light shine. These are ideals Rick would want us to reflect on as we consider his life and work. Rick is survived by his wife, Kim; sons Collin, and fiancé Shauni Prihoda, and Jared; parents Jerry and Carolyn; brother Russ and wife Barbara, their sons Tucker and Jordan; parents-in-law Dayton and Merlene Houy; Aunt Patty Raley; Aunt Chris Goddard and husband Vance; and numerous other family members along with those he called family. As one last gift to the world, Rick donated his organs and blessed others with hope and life on Mother’s Day. Giving was a part of his nature, and therefore in lieu of flowers, the family requests memorial donations be made in his name to either the Highland Lakes Crisis Network https://www.highlandlakescrisisnetwork.com/donation/ Marble Falls Education Foundation https://www.marblefallsef.org/donate/ or Fellowship Baptist Church of Marble Falls http://fmf.life/give A Celebration of Rick’s Life will be held on Tuesday, May 17, 2022 at 3:00 pm at the Marble Falls High School Auditorium, 2101 Mustang Dr., Marble Falls, Texas. Online condolences may be made at: www.clementswilcoxfuneralhome.com
See more See Less

In Memory Of Rick Edwards