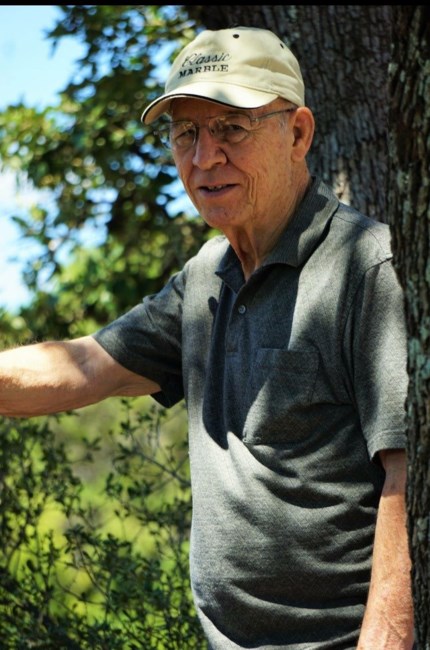 Ronald “Ron” Eugene Powell, 74, passed away on June 30, 2017 at Celeste Care in Llano, TX. Ron was born November 23, 1942 in Marble Falls to the late Edith Holland and Eugene Powell of Marble Falls. He graduated from Marble Falls High School in 1961 and enlisted in the United States Navy in 1964. He married his lifelong spouse Grace Archer of Pasadena, TX in 1965 before departing for Okinawa, Japan. His only child, David Powell, was born in 1966, and his wife and son joined him in Okinawa shortly afterward. They returned to Austin, TX in 1968 where Ron worked as a billboard painter. In 1969, Ron took a job at A to Z Rental where he managed for over 30 years. Ron retired in Granite Shoals in 2002. Ron loved to hunt and fish, and enjoyed playing golf. He enjoyed making knives from scrap material. He was very artistic and enjoyed drawing and painting. He belonged to a bowling league, and spent many evenings playing darts or pool. His greatest joy was spending time with his family and friends. Ron is survived by his wife of 52 years, Grace Powell of Granite Shoals, his son, David Powell and daughter-in-law, Deanna Cravens of Denton, TX, his grandchildren, Trisha Keel, Cassidy Wilke, Jessica Wilke, and Justin Powell of Denton, TX, and Kayla Powell of Pennsylvania, his great-grandchildren Carson Wilke, Alessandra Keel, and Heidi Wilke of Denton, TX, his brothers, Scott Lusinger of Austin, TX, and Rex Lusinger of Marble Falls, TX, his sisters Alicia Fontenot and Shanna Freisz of Nederland, TX. In addition, Ron leaves many nieces, nephews, and cousins. He was preceded in death by his parents, Edith Cauldwell and Eugene Powell, and his brother, Larry “Bo” Lusinger of Marble Falls, TX. Ron was taken to Clements-Wilcox Funeral Home in Marble Falls, TX. A visitation is scheduled Thursday, July 6 from 6-8 pm, and his funeral will be held Friday, July 7th at 10 am at Clements-Wilcox Funeral Home with Mike Mitchell officiating. A graveside service will follow. Ron will be buried at the Holland Cemetery West of Burnet, TX off Mormon Mill Road. A Reception will follow at Ron and Grace’s home in Granite Shoals. A life that touches others goes on forever-unknown
See more See Less

In Memory Of Ronald Powell