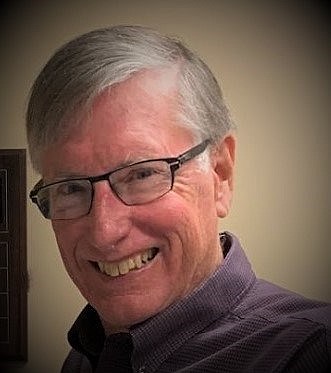 Stephen Tibbitts went to be with Jesus Thursday Oct 3, 2019 in Granite Shoals, Texas. Stephen was born in New York, the second child to John and Helen Tibbitts. After high school, he attended the United States Air Force Academy and swam competitively all four years. He next attended medical school at Tulane University in New Orleans. He began his 20 year career in the Air Force in Biloxi, Mississippi where he met a captivating young nurse from Iowa named Diana DeGrange. They were married September 6, 1980 and have three children. They were fortunate to spend four years stationed in Wiesbaden, Germany and travelled extensively throughout Europe. Upon his retirement from the Air Force, Steve worked 23 years as a private practice radiologist in Victoria, Texas. Steve volunteered at Parkway Church, coaching little league baseball, acted as swim team and soccer booster club presidents along with a host of other activities. He enjoyed the outdoors: biking, swimming, wind-surfing, snow-skiing, gardening, and spending time on Lake LBJ with his family and friends. Steve had just retired and was looking forward to more time with family, traveling with his wife, completing obedience class with his Australian shepherd puppy and his hobby of collecting and repairing antique clocks.

He is survived by his wife of 39 years, Diana and their children Jessica (Unruh, Zachary), Adam, and Luke. He has three grandchildren: Dylan, Harrison, and Sadie Unruh. He is also survived by his father and three siblings, Tibi, Connie, and Peter and their families. Steve has multiple brother-in-laws: David. Jeffery, and Eric DeGrange and their families. He is preceded in death by his mother earlier this year and his in-laws, Elton and Bess DeGrange.

Online condolences may be made at: www.clementswilcoxfuneralhome.com

The family asks for prayers for comfort and safe travels. Stephen has touched many lives and we anticipate lots of people traveling to celebrate his memory. We are thankful Stephen put his faith and trust in our Lord Jesus Christ for the forgiveness of sin and his salvation. We are greatly comforted that anyone who chooses to claim Jesus as Lord and Savior will see Stephen again someday in heaven.

In Memory Of Stephen William Tibbitts