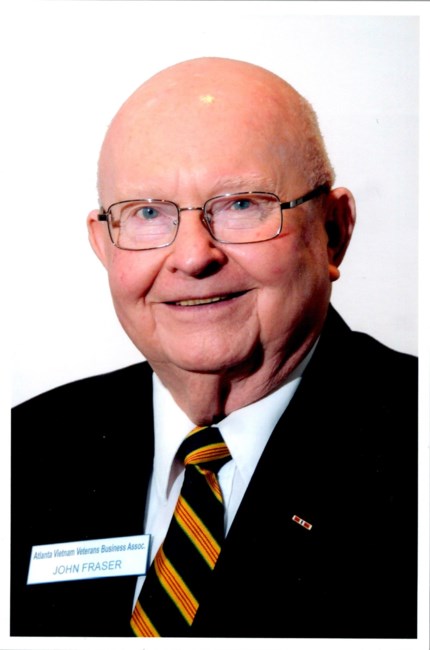 John Robert Fraser was born May 28, 1936 in Greenville, Texas where he grew up. He joined the Texas National Guard while in high school, serving for eight years while attending high school and college. He graduated from Texas Wesleyan University in 1957 with a bachelor’s degree in social science and from Southern Methodist University in 1961 with a bachelor’s degree in Theology. He later earned master’s degrees in guidance counseling and social science. In addition to his eight years in the Texas National Guard, John served 20 years in the Army as a chaplain, retiring as a Lt. Colonel with 28 years’ service on July 31, 1983. During his army career with many relocations, home was always where the family was. John served two tours in Vietnam, one as an Infantry battalion chaplain and one as a radio relay station chaplain. John’s final assignment was at Forces Command at Fort McPherson, Georgia. Among John’s military medals are the Bronze Star with Oak Leaf cluster, Meritorious Service Ribbon with Oak Leaf cluster, and Army Commendation Medal with Oak Leaf cluster. Upon retirement from the Army in 1983, John was not ready to go back to being a civilian pastor. He worked for ten years as a parole officer with the State Board of Pardons and Paroles, where he managed a caseload, served as handgun range officer, and was team manager for the arrest team. He then joined the staff of Mt. Bethel United Methodist Church as an associate pastor where he served from 1993 to 1996. He retired, then ten years later rejoined the staff at Mt. Bethel UMC, and after two years he retired so that he and his wife could enjoy their families and “have a grand time together.” He was a member of the North Texas conference. John was a patriot and had a deep love for family. John is survived by his wife Alice, his two daughters Kathy Rachal (Woody) of Spring, Texas, and Dawn Knapek (Ray) of Perry, Georgia; grandchildren John Rachal, Margaret Knapek, and Fraser Knapek; step-children Margaret McKavitt (Tom) of Annapolis, Maryland, Frank Bell of Brookhaven, Georgia, and Ed Bell of Katy, Texas, and their children and grandchildren. John was pre-deceased by his parents, Lois Jessie Ivy and Robert George Fraser, and first wife, Donna. His funeral service will be held on Sunday, January 22, 2023 at 3:00 p.m. at Grace Resurrection Methodist Church. The family will receive visitors at the H.M. Patterson & Son - Canton Hill Chapel on Saturday, January 21, 2023 from 5:00 to 7:00 p.m. In lieu of flowers, memorial contributions may be made to the John Fraser Helping Hands Fund at Grace Resurrection Methodist Church or Roswell United Methodist Church.
See more See Less

In Memory Of John Fraser