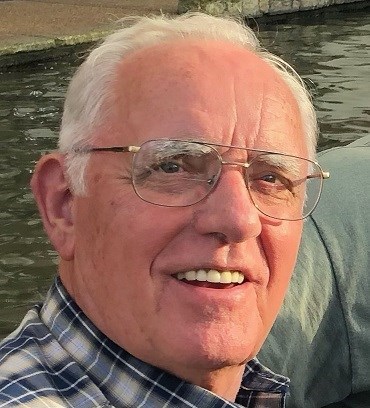 Ralph L. “Bud” McBride, Jr. 82 of Markle passed away on Saturday, August 6, 2022 at his residence. Bud was an independent truck driver, and drove on and off over the years for various companies. He owned and operated “The Shoe Cobbler” in Fort Wayne from 1978 until his retirement in 2005. He was a member of Markle United Methodist Church and the Texas Coastal Bend Jammers of Rockport, Texas. Bud enjoyed jamming with his friends, playing and singing at local events and nursing homes. He loved to drive and travel, spending winters in South Texas and enjoyed family genealogy. Bud enjoyed motorcycles in his younger years. He was a member of the Gospel Barn in Bluffton. Bud was born on March 3, 1940 in Markle, the son of Ralph L. and Ruth R. (King) McBride, Sr. He was united in marriage to Margaret A. Frederick on June 1, 1957 in Markle. Margaret preceded him in death on December 5, 2020. Survivors include two daughters: Brenda (Rick) Deubner of South Whitley, Kathryn (Shawn) Klepper of Hicksville, OH; two sons: Fred (Ceci) McBride of Fredricksburg, TX, Mike (Tina) McBride of Fort Wayne; 14 grandchildren and 24 great grandchildren. He was preceded in death by his parents; two daughters: Kimberly A. McBride Miller, Connie S. Parsons; two brothers: Bill McBride, Steve McBride; a sister: Janet Will; two grandsons: Cory Nichols and Harry McMurray. Visitation will be held on Wednesday, August 10, 2022 from 3:00 pm – 7:00 pm at the Myers Funeral Home Markle Chapel, 415 N. Lee Street, Markle, Indiana. Funeral service will be held on Thursday, August 11, 2022 at 11:00 am with one hour of visitation prior to the service at the Myers Funeral Home Markle Chapel with Mark Pope officiating. Interment will be at the Star of Hope Cemetery in Huntington County. Memorial donations can be made out to Franklin Graham Ministries in care of Myers Funeral Home, P.O. Box 403, Markle, IN 46770.
See more See Less