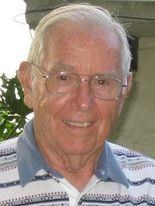 Joel Heaton, age 95, of McDonough, Georgia passed away on Sunday, January 16, 2022. He was born October 10th, 1926 in Oglethorpe, Georgia. Joel was one of seven children to Luther and Blanche Heaton. He was a World War II Navy Veteran. He was employed by Delta Air Lines from 1952 until his retirement in 1985. He was married to Mary Helen Bailey from April 1945 until her death in February 1998. They had four children: Joel Jr., Barbara Sue, Mary Elizabeth, and Winnie Jane. In January of 1999, he married Doris Lewis and they were married until his death. Joel enjoyed Georgia Tech football, pigeon racing, water skiing, attending baseball, basketball, and soccer games for his grandchildren, and traveling with his wife and his grandchildren. He was very active in three baptist churches over the years: Mountain View, Ash Street, and Salem. He is preceded in death by his first wife, Mary Helen, his parents, three brothers: Luther Jr., Charles, and Jake Heaton, along with his great granddaughter Bailey Morton. He is survived by his wife Doris, four children, 8 grandchildren, 7 great grandchildren, and 1 great great grandson. Funeral services will be held at 1:00pm on Monday, January 24, 2022 at Salem Baptist Church. The family will receive friends one hour prior to the service. Interment will follow at Forest Hills Memorial Gardens in Forest Park, Georgia.
See more See Less

In Memory Of Joel Heaton