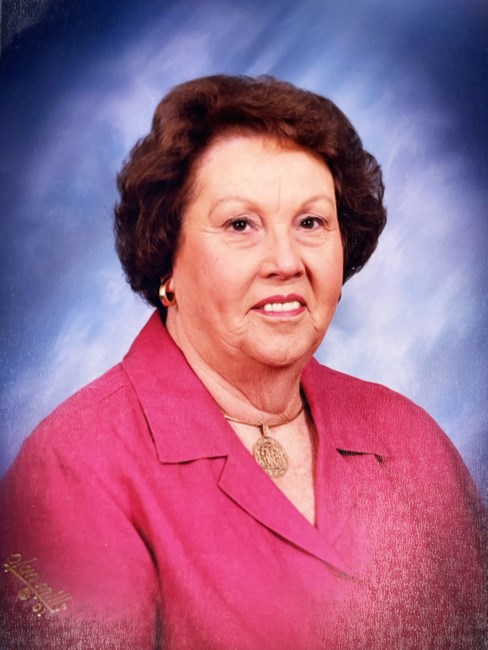 Anne Rooks Hampton, born on November 2, 1928 in Mercer, Tennessee, passed away on May 10, 2022 surrounded by her children in Southlake, Texas. Anne was preceded in death by her husband, Clarence O. "Hamp" Hampton, as well as her parents, Helen Pennington and Robert Eugene Rooks of Mercer, Tennessee. She also leaves behind her children Robert "Bob" Hampton of Memphis, Tennessee, Clarence O. Hampton, III of New Jersey, and twin daughters Rene Hampton Brady (Dean) of Flower Mound, Texas and Helen Hampton Jenkins (Greg) of Trophy Club, Texas. She was most grateful and proud of her seven grandchildren, Hannah Cate (David), Heath Hampton, Bailey Jenkins Stults (Tim), Parker Brady, Benjamin Jenkins, Garrett Brady, and Hatch Hampton, as well as two great-grandchildren, Jonah and Tomi Jean Cate. Anne was known for her infectious smile and the ability to light a room everywhere she went. She took pride in raising her children and grandchildren. She spent most all of her working years either as a physical education teacher, coach, or athletic director. She also created and ran a summer camp for girls called Camp Hutchison for many, many summers until she retired, at which time the camp continued on. Mother went on to work at Hampton Designs as her fun job and made so many friends through the years. Before moving to Texas in 2015 so she could be closer to three of her children, she was very involved in mentoring young girls with troubled homes at University Campus School in Memphis. Once in Texas, she became involved in the ladies group at her church as well as the alumni teachers association in the area. Anne had a great long career at The Hutchison School in Memphis and upon retirement she had a scholarship award called The Anne Rooks Hampton Tri Athlete Award named in her honor to which she was so proud. This award is given to an athlete every year. Visitation will be held Monday May 16, 2022 beginning at 11:00 AM with the funeral service service beginning at 12:00 PM, all at Memphis Funeral Home, 5599 Poplar Avenue, Memphis, TN. A private burial will follow at Memorial Park Cemetery where she will be buried next to her husband. Any Memorials can be made to The Hutchison School in her memory at: www.hutchisonschool.org/giving We would like to give a special thanks to her caregiver Mona Espinoza for the last six months and Marva Seymour for the last six years, who has become part of our family and was with us until mom passed that morning. Fond memories and expressions of sympathy may be shared at www.MemphisFuneralPoplar.com for the Hampton family.
See more See Less

In Memory Of Anne Rooks Hampton