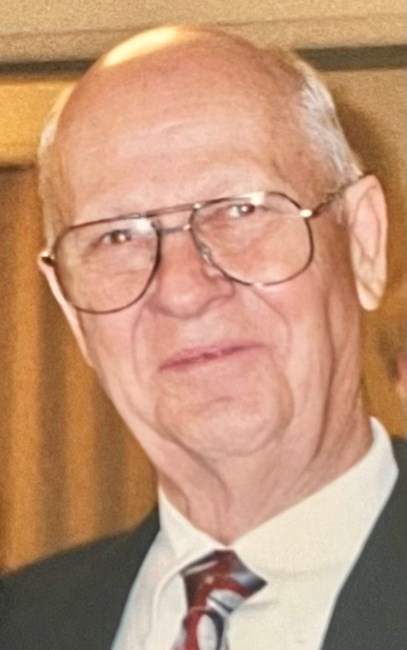 James C. Morrow, 96, of Memphis, Tennessee, passed away on Sunday, August 7 2022, after a lengthy illness, at the Quince Nursing and Rehabilitation Home. James, the son of the late Edward and Lena Morrow, was born in Turrell, AR. He was a graduate of Nicholas Blackwell High School. He proudly served his Country in the United States Army from 1944-1952. James was a World War Il combat veteran and served in 15th Constabulary Squadron in Weiden, Germany after the war. In his civilian life, his voice could be heard across the Mid-South as he was a radio announcer on several local stations for many years. He retired as a railroad engineer in 1991, from the Frisco/Burlington Northern Railroad. Until his illness, he attended Berclair Baptist Church as a longtime member. James is survived by his wife of 68 plus years, Hazel Cossitt Morrow; three daughters, Susan Morrow Wilson (Mike) of Bartlett, TN, Lynn Morrow Zills-Snider (Ron) of Kenton, TN and Tina Morrow Bevis of Bartlett, TN; six grandchildren, Ashley M. Wilson, Michael J. Wilson (Katie), Allyson Wilson Kralis, Kensie Zills Ogden (Tyler), Lauren M. Bevis and Landon S. Bevis; four great-grandchildren, Luke M. Wilson and Ryleigh K. Wilson, Dalton A. Kralis and Ainsley J. Kralis, all of Bartlett, TN. His family and friends will miss him greatly. The family will receive friends on Friday, August 12, 2022 from 1:00 pm until 2:00 pm with the celebration of life services to follow at Family Funeral Care, 4925 Summer Ave, Memphis, TN 38122. The interment will occur at Memphis Memory Gardens, 6444 Raleigh Lagrange Road, Memphis, TN 38134. Fond memories and expressions of sympathy may be shared at www.FamilyFuneralMemphis.com for the Morrow family.
See more See Less

In Memory Of James C. Morrow