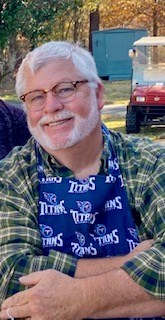 John Blount, devoted and loving father, husband, friend, and mentor, passed away January 21st, 2022 at home surrounded by family and friends. He was 61. John is celebrated by many friends and family. He is survived by his wife, Toni Blount; sons, David and Johnny (Tristan) Blount; sister, Carol (Tom) Thackston; and many nieces and nephews. John is preceded in death by his father, William A. Blount Sr.; mother, Lucy Ann Tate Blount; sister, Ann Tate Lilley; and brother, William A. Blount Jr. Big John used his time efficiently. He and Toni built a beautiful home in Eads, Tennessee which they filled with years of family, laughter, and love. John was a maker of good times. From the legendary barn parties and holiday celebrations to long weekends on the boat in Pickwick—where John was you were bound to have fun. John was a country boy but he was also an Orange Mound staple. Founder and president of Nu-Prime of Memphis on Airways Blvd., John spent decades beautifying homes throughout the area. As a leader, John inspired and guided many others—both professionally and personally. John was who you called when you needed advice, needed a comforting ear, or needed to work cattle. As a role model & enabler of success, John was able to hear from so many friends and family how much he impacted their lives. Toni called him a Jack of all trades and a master of none. Anything that could be done, John could do it—or at least he’d try. John’s strength was an inspiration. He would move mountains for his family. He was strong as an ox and never met a challenge he couldn’t face. John kept his same spirit and strength through eight years of cancer. John was the foundation that kept us all strong, the glue that kept us together, and the heart that made us feel so loved. He will be greatly missed. Visitation will be held at Memphis Funeral Home on Poplar on Wednesday, January 26th from 5:00-7:00pm. A funeral service is scheduled for 10:00am on Thursday, January 27th at St. Francis of Assisi Catholic Church. Flowers can be sent to Memphis Funeral Home on Poplar. Donations can be made in John’s name to American Cancer Society.
See more See Less

In Memory Of John G. Blount