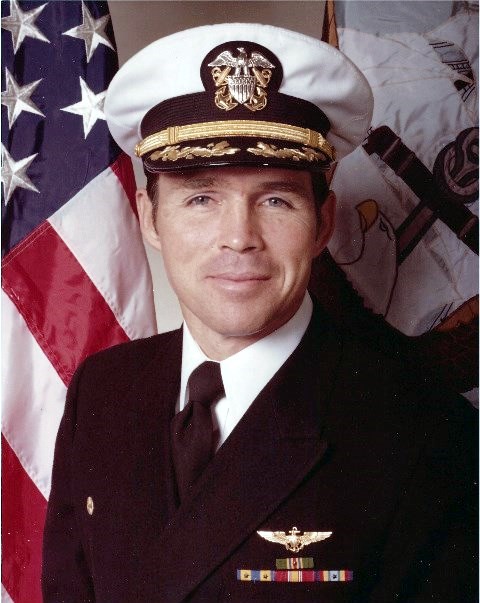 Richard Stephen Farrell, Commander, United States Navy (retired), 70, beloved husband, father, grandfather, brother and friend to all who were blessed to have known him, passed away peacefully in the presence of his family on March 31, 2014 in Collierville, TN. He was born in Glen Ridge, NJ, and grew up watching his father, Edward Farrell, play for the New York Yankees, which explains his lifelong passion for baseball. Richard graduated from the United States Naval Academy in June 1965. Following a distinguished career as a Naval Aviator and Fighter Squadron Commander, during which he was selected to represent the United States on flight duty with the British Royal Navy, he established residence in Collierville and joined Federal Express, ultimately retiring as a DC-10 Captain. He is remembered as primary lead F-14 pilot in the motion picture, “THE FINAL COUNTDOWN,” as an extraordinary fighter pilot and Naval leader, as a Veteran who continued to serve his fellow Vets at the VA Hospital, as a faithful servant of the Annunciation Greek Orthodox Church and as a dedicated contributor to the Boy Scouts of America. His fellow aviators would tell you that this humble gentleman would never lay claim to the fact that they considered him to be the very best of the best among them, a truly distinguished ambassador for their profession, their Navy, their company and their nation and a man representative of the highest standards of personal honor and decorum. His family would say that he was a man among men who dedicated his life to caring for them and who set the highest example for his children. All of his friends would say that he could brighten even the darkest room. Richard was preceded by the passing of his daughter Andrea, brother Edward, sisters Linda Fahey and Joan Feeney, sister-in-law Patty Umberson, brother-in-law Ted Feeney, mother-in-law Sonja Umberson and his parents, Edward and Helen Farrell. He is survived by his wife, Linda, his true soul mate, and by his treasured children, daughter Jennifer Ackerman (Brian), sons Richard, Matthew and Brian Farrell and grandson, Michael Ackerman and by his sisters Betty Heffernan (Mike), Sheila Hailer (Don) and Ellen Mullen (Larry). He is also survived by his father-in-law William Umberson, sons-in-law Charles and Norman Umberson (Patrice), sister-in-law Patricia Farrell and many nieces, nephews, and cousins. Visitation will be on Sunday, April 6 from 5 to 8 p.m. at Memphis Funeral Home. Funeral Service will be Monday, April 7 at 11 a.m. at Annunciation Greek Orthodox Church, followed by interment at West Tennessee Veterans' Cemetery at 12:30 p.m. In lieu of flowers, Richard's family requests memorial donations be made to St. Jude Children's Research Hospital.
See more See Less

In Memory Of Richard Stephen Farrell