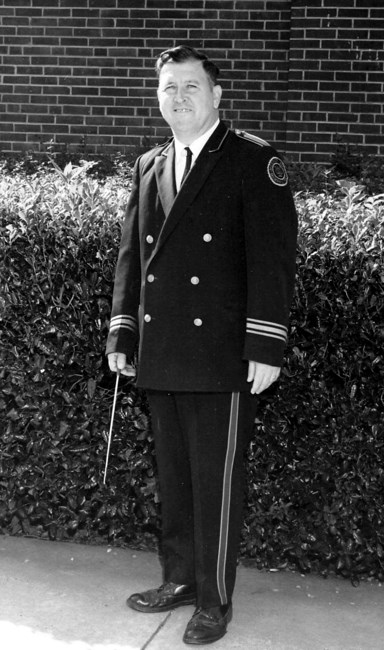 T.W. (Tom) Swayzee Sr. peacefully went to be with his Lord on August 18. Born in 1920 in Pine Bluff, Arkansas. He served in the Army Air Corps bands in World War II. His first public school teaching was in Little Rock and Crossett, Arkansas. He played bass clarinet in the Little Rock Symphony. In 1954 he became the band director at Mumford, TN. In 1959 he was Memphis Overton’s first band director. He moved to Messick High School in Memphis the following year. At Messick, Mr. Swayzee developed an effective and accomplished band program including many All-State and West Tennessee players. Many of his students became professional musicians and teachers. In 1970, Mr. Swayzee was elected to the American School Band Directors Association. This association is dedicated to the development and improvement of school bands. He later served as State membership chairman for the group. In 1973 Mr. Swayzee transferred to Wooddale where he taught for 7 years before retirement. After retirement, Mr. Swayzee taught 22 years privately for Harding Academy. Marches for concert for concert programs were to be treated as miniature classics and the bands of T.W. Swayzee were expected to respect this viewpoint. The writing of Frank Simon, Sousa’s finest first cornet player were studied for how Sousa performed his marches. The former students of the Messick band continue to meet annually in appreciation for their band experiences under T.W. Swayzee In 2011 Mr. Swayzee was one of three to be honored by the West Tennessee School Band Orchestra Association Hall of Fame for his Outstanding Achievement and Continuous Service to Students and Directors of West Tennessee. As a composer and founder of Franton Music and member of ASCAP, Mr. Swayzee had many published originals including America Bless God. A devout Christian, Mr. Swayzee lived to honor his Lord. He was a deacon at Colonial Baptist Church and was founder and director of the Christian Winds Community Band. He sang in the choir at Colonial Baptist and served as interim choir director. He also led several revival choirs. After moving to Fort Lauderdale, Mr. Swayzee attended New Hope Community Church. He played clarinet in the American Legion Concert band and enjoyed sports, in particular the Florida Marlins and Miami Heat. Mr. Swayzee is predeceased by his wife Frances and survived by son Tom Swayzee and daughter in law Amy Tucker Swayzee. The family will receive friends, Tuesday evening, August 23 from five o'clock until eight o'clock in the Life Remembrance of Memphis Funeral Home, 5599 Poplar Avenue. Funeral services will be conducted at twelve noon on Wednesday, August 24, 2016 in the Memphis Funeral Home Chapel. Interment will follow at West Tennessee Veterans Cemetery.
See more See Less