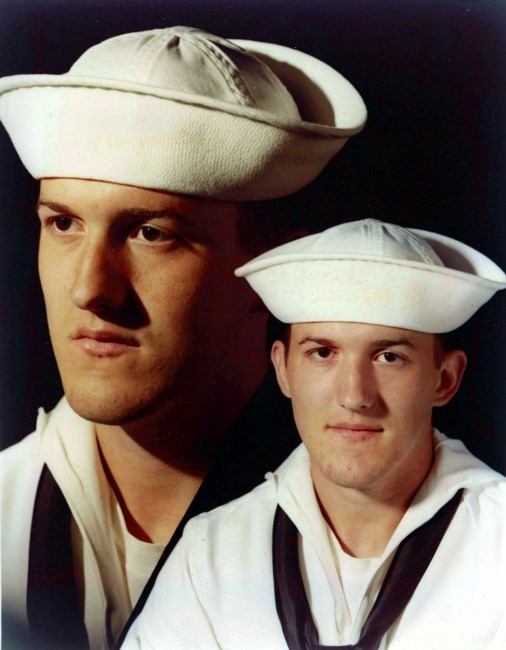 Daniel Lawrence Eaton Sr was born on January 29th, 1964, in Rochester, NY, to Lawrence and Barbara Eaton. Danny had two older brothers: Michael, David, and an older sister, Karen. Through Lawrence's work at Honeywell, the family would move between North Syracuse, NY, and Phoenix, AZ, before finally settling in Rome, NY, in the summer of 1966. While living in Rome, Danny attended Turin Road Elementary School and Strough Junior High School. The family moved back to Phoenix in the summer of 1978, only to return to Jonesville, NY, the following year where Danny attended and graduated from Shenandoah High School in 1982. Danny was always interested in the military, and after graduation, he enlisted in the U.S. Navy. He went to boot camp at Great Lakes, IL, before heading down to Millington, TN, for schooling. He was to become an AW – Air Anti-Submarine Warfare Technician – also known as an Aircrewman. From Tennessee, Danny received orders to HSL-37 in Barbers Point, HI. It was at this squadron that Danny was introduced to his first wife, Kelly. Together, they were transferred to HSL-41, North Island, CA, shortly after the birth of their son, Danny Jr. After eleven years together, the two divorced, and Danny was transferred to Patuxent River Maryland before retiring in Florida after 20 years of active duty service. Danny's parents had retired to Chandler, AZ, and after Danny's retirement from the Navy, he joined the rest of the family in Arizona. Since he was interested in law enforcement, Danny went through the training program for the Arizona Correctional System and, upon graduation, worked at the Arizona State Prison in Florence, AZ. He worked as a correctional officer for 10 years. It was while he was working for the prison that he met the love of his life, Tamara. Danny and Tamara married in July of 2012, and he was welcomed into her family as one of their own. He became a father figure to her daughter, Natasha, and her husband Alex. He was Papa to Natasha's 5 children: Alyssa, Alex Jr., Xavier, Annalicia, and Martin. Danny and Tamara recently became great-grand-parents to a beautiful great-granddaughter, Leilani. Danny was interested in auto mechanics, so he took classes and earned an associate degree in Automotive Mechanics. He worked briefly at a local Ford Dealer before Kelly Services contacted him for a job at Intel Corporation. In 2016, his son Danny Jr. married his best friend and the love of his life, Stefanie. In 2017 and in 2020, the two made him a grandfather to two beautiful granddaughters – Leila and Cecilia. Around this time, Danny's parents needed assistance, and Danny and Tamara took care of them until their deaths, both in 2018. Since Danny was the primary caretaker of his dad, he took it especially hard when Lawrence passed in February of 2018. Just recently, Danny and Tamara had planned to visit Danny Jr, and finally meet his wife Stefanie and his granddaughters in person while moving to Tennessee to get a fresh start. But that was not to be. Danny was taken from us tragically on January 16th, 2023. God had other plans for him..... A committal service for Daniel will be held Thursday, February 16, 2023 at 1:00 PM at National Memorial Cemetery of Arizona, 23029 North Cave Creek Road, Phoenix, Arizona 85024. Fond memories and expressions of sympathy may be shared at www.LakeshoreMort.com for the Eaton family.
See more See Less

In Memory Of Daniel Lawrence Eaton