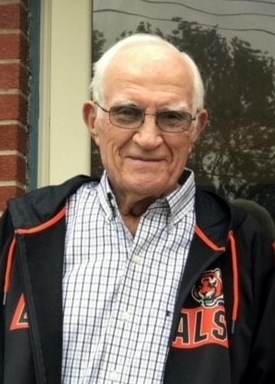 Robert Randall Davis, 92, of Oxford, formerly of Middletown passed away on May 6, 2022 at his residence. He was born September 19, 1929 in Blue Diamond, Kentucky. The son of John Henry and Mollie (Durbin) Davis. He was a loving husband, father and grandfather. Robert worked at Monsanto Mound, Miamisburg, Ohio where he retired in 1985. He enjoyed spending time at his lake house in Lake Cumberland Kentucky, fishing, hunting and making pumpkin rolls for holidays and homemade wine which everyone loved. Robert was a member of the Middletown Moose, Eagles, Orioles Lodge, and was a Kentucky Colonel. In addition to his parents, he is preceded in death by his beloved wife, Evelyn Davis, stepson, William Taylor. Robert also known as Pap is survived by children, John (Karen) Davis, Sue Davis (Frank) Nemcic, Mike (Lisa) Davis, David (Tanya) Davis, Kim (Harold) Holly, Todd (Rhonda) Taylor, Tracy (Pedy) Buttery, David (Shirley) Taylor, Dennis (Madelaine) Taylor; sisters, Glenath, Judy, Norma Jean, Ruth; MANY grandchildren, great grandchildren, great-great grandchildren and many nieces and nephews. The family would like to also recognize a very special nephew, Randy Robinson, and Lakeisha, Michelle, Lisa and Noah of Heartland Hospice of Cincinnati. Visitation will be 11:00am -1:00pm on Thursday, May 12, 2022 at Breitenbach Anderson Funeral Home, 517 South Sutphin Street, Middletown, OH 45044. A Funeral Service will follow at 1:00 pm with Pastor Ray Phillips officiating. Burial will be at Butler County Memorial Park.
See more See Less

In Memory Of Robert Randall Davis