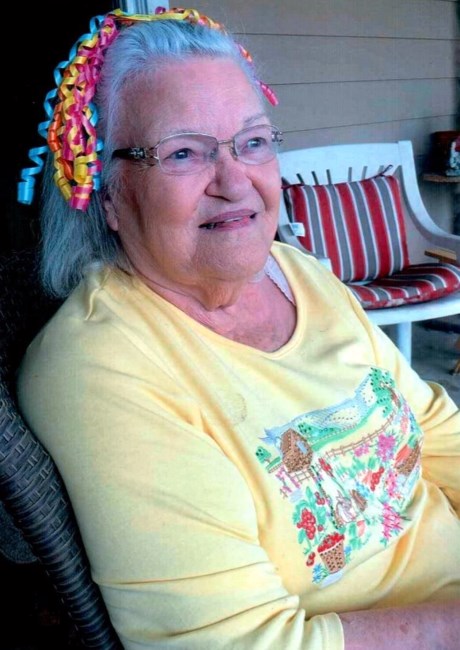 Beulah Fern Ellis, 90, of Midland, Texas passed went to be with the Lord, Sunday, January 16, 2022. Surrounded by her family. Beulah was born September 19, 1931 in Colorado City, TX to James & Beulah Coker on her Mother’s birthday. She graduated from Colorado City High in 1948, & met the love of her life, Melvin Edwin (Pete) Ellis at the Palace Theater; she was selling tickets & popcorn, & He was running the projector. They started dating, Pete would pick her up in an ice truck for dates, and His second job was delivering blocks of ice. Pete & Beulah were married August 6, 1949 in Colorado City, and went on a honeymoon to the big city of Snyder, TX. They lived in Lubbock before moving to Midland in 1951. She was blessed with two sons, John & Matt, & remained a homemaker for most of her life. Fern is preceded in death by her Husband, Melvin Edwin (Pete) Ellis, Son, John Ellis, Sister, Patsy Marie Donnel, Brother, Roger Coker, & Parents, James & Beulah Coker. Fern is survived by her Son, Matt Ellis & his Wife, Lleyana Ellis, Daughter in law, Anna Ellis, Two Granddaughters, Kristin & Jennifer Ellis, & great grandson, Chad Smith. Along with numerous great-grandchildren, Nieces, and Nephews. A Celebration of life will be held at Ellis Funeral Home, 801 Andrews Highway in Midland, Texas at 10AM, Saturday, January 22, 2022. In Lieu of flowers, Please send donation s to Hospice of Midland, 911 W Texas, Midland, Texas. Fond memories and expressions of sympathy may be shared at www.ellisfunerals.com for the Ellis family.
See more See Less

In Memory Of Beulah Fern Ellis