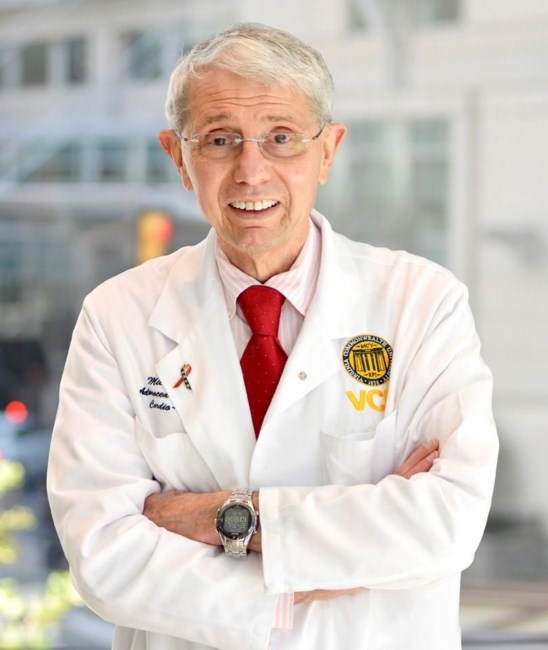 Michael Lee Hess MD was born in Philipsburg, Pennsylvania to Russell Hess and Leona Johnson Hess on August 10, 1942. He lost his 9 year battle with cancer at age 76 on April 13, 2019 in Richmond, VA. He is survived by his wife of 50 years, Andrea Hastillo (MD) Hess; their only child Samantha (Mandy) Hastillo Hess Hudson MD and her husband Mark Hudson and his granddaughters Sophie Hastillo Hudson & Ziva Chaharyn Hudson all of Richmond, VA; his brother Joseph Hess and his wife Janet of Cheswick, PA; his niece Maria Lynn (Hess) Collins and her husband Jon and their 4 children of Furlong, PA; and his nephew Jason Hess, his wife Meghann, and their daughter of Pittsburg, PA. Dr. Hess obtained his undergraduate degree in 1964 at St. Francis University in Loretto, PA. He earned his Medical Degree in 1968 from the University of Pittsburg, staying there for his Residency and Chief Residency. He earned a Young Investigators Award from the American College of Cardiology in 1972. He pursued additional medical training in Cardiology at St. Bartholomew’s Hospital in London and through the US Navy. He served his country as a Cardiologist at Portsmouth Naval Hospital from July 1973 to July 1975, attaining the rank of Lt. Commander and earning a Fleet Commendation in Medical Education. Dr. Hess moved to Richmond, VA and joined the Medical College of Virginia (MCV) in 1971 in the Department of Physiology, and upon discharge from the Navy, additionally joined the Department of Internal Medicine in 1975. He was appointed to Professor of Medicine in Cardiology in 1980. From 1981 to 1982, he served as the first President of the International Society of Heart and Lung Transplantation, an organization he co-founded. From 1982 to 1991, and then 1999 to 2002, he was the Director of the Heart Failure Transplantation Program. Dr. Hess would serve as Acting Chairman for the VCU Division of Cardiology from July 1988 to 1989, and as Chairman of the Division of Cardiology’s Laboratories and Research. Starting in 2002, he was the Director of the Advanced Heart Failure Program during which time VCU began utilizing the Total Artificial Heart. In 2013, influenced by his cancer experiences, he established VCU’s Cardio-Oncology Program and acted as its director until his retirement in 2018. In these roles he published over 200 research papers, served as an editor for nearly 40 publications, and authored or edited 3 full length books. Upon his death, he was writing the history of MCV from its founding through today, including its name change to Virginia Commonwealth University (VCU) Health System. Beyond his MCV/VCU work, highlights from his extensive CV include multiple projects with the National Institutes of Health, the Department of Veterans Affairs, international collaborations with the Canadian Heart Foundation, and space based research with NASA. He was involved in numerous societies including the American Physiological Society, both the Southern and American Society for Clinical Investigation, and as a Fellow of the American College of Cardiology and American Heart Association. Already a member of Alpha Omega Alpha (AOA), the medical honor society, he was most proud upon the induction of both his wife and daughter to AOA in 2007. Dr. Hess was fiercely devoted to teaching and patient care, being a passionate clinician. However, he was equally engaged with his students including cardiology fellows, PhD students, postdoctoral trainees, medical students and other healthcare professionals. From this, he earned many awards. From his peers and patients he was voted into the Top Doctors in Richmond, Best Doctors in Virginia, and Best Doctors in America. From his medical students he was awarded the Outstanding Teacher Award 7 times, the Outstanding Teacher for Advanced Cardiovascular Physiology 4 times, and was awarded the Distinguished Clinical Care Award from the Department of Internal Medicine. He earned 3 major university-wide honors including VCU’s Distinguished Scholarship Award in 1989, the Distinguished Clinician Award from the VCU Health System in 2003, and the University Award of Excellence in 2011. Dr. Hess worked 364 days a year, only staying home that one day where there was too much ice on the road for even a Pennsylvanian native to drive. In what free time he had, he devoured novels of historical fiction and political thrillers and was an avid student of history. He made a spectacular beef stroganoff and taught both his daughter and oldest granddaughter the secrets of his recipe. He loved setting up luminaries every Christmas Eve and handing out poppies on Veteran’s Day, reminding everyone of the importance of respecting those who have served. He and his wife shared a love of the Pittsburg Steelers and their five rescue cats. He loved his family dearly and amongst his final directives were “Family First”. Dr. Hess requested NO flowers; instead, asks for donations to one of three options in his memory: VCU Massey Cancer Center, or VCU Child Development Center, P.O. Box 980013, Richmond VA 23298, or St. Michael’s Episcopal School, 10510 Hobby Hill Rd. Richmond, VA 23235. The family will hold both visiting hours Friday, April 26 from 6-8pm and a memorial service Saturday, April 27th at 2pm at Woody’s Funeral Home, 1020 Huguenot Rd, Midlothian, VA 23113.
See more See Less