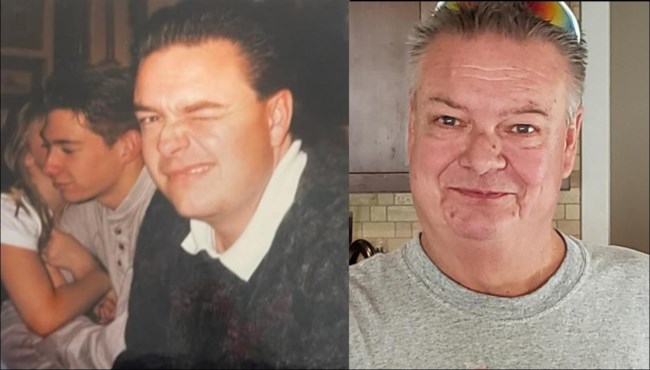 Sadly, Kelly’s earthly battle ended on January 16, 2023, surrounded by the people who loved him most. He did not lose – he peacefully surrendered. Kelly was born in Granger, Utah on July 25, 1963 to Leo Leonel and Shirley Cleo Shields Colvin. As the youngest of eight children, he was never wanting for attention, support, or love. He was also the first baby boy born at Pioneer Valley Hospital. He graduated from Granger High School in 1981, and was very proud to be a “Lancer Guy.” He sang the Granger High Fight Song everywhere he went. In 1991, Kelly married the love of his life, Stacy Ames. They shared 31 happy years together cheering for the Utes, tailgating, attending the Salt Lake and Park City Arts Festivals, going to concerts, and raising their wonderful children. Kelly’s proudest moments were watching them grow into incredible, outstanding adults. One of Kelly’s strongest characteristics was his work ethic, which he passed on to his children. He worked as a window installer for Semco with his sisters for ten years, as a driver for Anheuser-Busch, and as a driver for Pepsi for 25 years, which he loved. Kelly had a love for all sports, especially baseball. If you gave him a player’s number, he could tell you their name, position, and standings. At a young age, he was listed four times in the National USSSA Magazine for his excellent batting average. He was also a die-hard Utah Utes and Oakland Raiders fan, and was a Utah season ticket holder for 30 years. He also played softball and participated in a bowling league with his wife and brother. Kelly spent many years coaching his children and grandchildren in softball, baseball, and fishing. Kelly was very kind, giving, and passionate. You always knew where you stood with him, as he loved with his whole heart. Through the miracle of donation, his heart will continue to share that love for years to come. His caring nature led to many lifelong friendships and cherished chosen family members, upon whose lives Kelly left a lasting imprint. Kelly was supportive in good times and not-so-good times. Kelly had fantastic taste in music; some of our favorite memories were of him singing to AC/DC or Aerosmith. Every year you could look forward to a call and Kelly’s own special rendition of “Happy Birthday” by the Beatles. Kelly was also known for giving everyone a unique nickname. Aaron (Bud) – His shadow, hero, friend, and little boy. Jennah (Bug) – His all-star and, most importantly, his baby girl. Stacy (Honey) –His best friend and other half. Kelly is succeeded by his wife and "lobster" Stacy; dog Myrti and cat Wild-Rose Colvin; son Aaron (Kandice) Colvin; daughter Jennah (Nick) Garcia; six grandkids: Porter (18), Gavin (17), Taylor (15), Elijah (7), Elliana and Liam (2); siblings Lyle, Shannon, and his partner-in-crime Jeff (Dianne) Colvin; mother-in-law Carole Ames (Gran), brother & sister in law, Gary and Lana Ames; friend and Stacy and Kelly’s “favorite ex-wife” Tammy Ferris; Kirk Smith, Matt Baumann and many nieces, nephews, and good friends. Kelly was preceded in death by his parents Leo and Shirley Colvin; father-in-law Michael Ames; grandparents; 4 sisters: Kathleen, Patty, Jolene, and Karen; niece Mikayla; and his fur babies: his Baby Puppy Sandy, Scalley, Turbeaux, Laser, and Raider. Services will be held Friday, February 3, 2023 at 6:00 p.m., with a visitation beginning at 5:00 p.m. at Wasatch Lawn Mortuary, 3401 South Highland Drive in Millcreek, Utah. A celebration of life will follow. In lieu of flowers, please consider donating to Project K-9, your local first-responders, or your favorite charity. Support Kelly by repping your favorite team, band, or saying at his celebration.
See more See Less

In Memory Of Kelly Lee Colvin