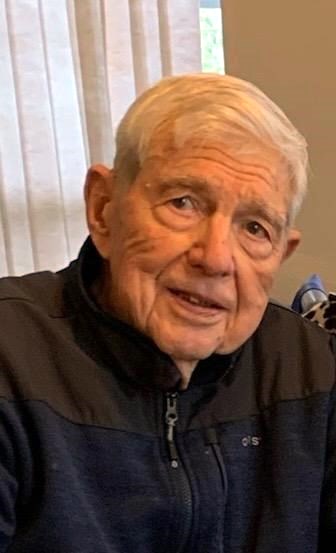 Hiram Scott Wallace was born on December 15, 1926 in Seattle Washington to Hiram Brainard Wallace and Edna Melvina Anderson. He lived on the family’s Snoqualmie Valley dairy farm for more than 70 years, except for the three years that he served in the United States Marine Corps in the South Pacific during WWII. He was a graduate of Tolt High School, where he met his high school sweetheart, Mary Loutsis, who he married in 1948. In their early years of marriage, Scott commuted to the University of Washington, where he earned a degree in Sociology while running the farm with Mary. Scott and Mary had seven children, Susan, Ella, Hiram, Shelly, Scott, Marie and Steven. Scott was preceded in death by Mary and his son Hiram. In 1974, he married Sue Ostrem, and five more children – Mike, Katy, Dan, Joe, and John joined the family. Scott and Sue lived on the farm and were involved in the life of the local community for seventeen years, before Sue lost her battle to cancer. Scott married Mary Rose Chandler in 1993 and Carolyn, Phil, Jeff and John became a part of the family. Although Scott continued to farm until 1998, he and Mary Rose moved to her home in Bellevue. They enjoyed 26 years of marriage before Mary Rose’s death in 2018. From 1959 until 1967, Scott served as a King County Commissioner. He was instrumental in the purchase of the 500-acre Marymoor Park and the building of the Evergreen Point Floating Bridge. He remained politically active throughout his life. He served on the Board of Directors of Northwest Dairyman’s Association (Darigold). He was a longtime member of the King County Conservation District and he was one of the leading campaigners for the King County Farmland Preservation Program, which protected farmland and open space in the developing county. In addition to agricultural stewardship, he served as a member of many boards including First Mutual Bank, Harborview Medical Center and Performing Arts Center Eastside (Emeritus). Scott loved spending time with his children, grandchildren and great-grandchildren. He enjoyed everything Husky, especially Husky football and tailgating with family and friends. He also enjoyed Pinochle, Poker, reading the paper and staying informed of current events. Contributions in Scott’s memory may be made to the Sno Valley Senior Center in Carnation. A private burial will take place at Tahoma National Military Cemetery at a later date.
See more See Less

In Memory Of Hiram Scott Wallace