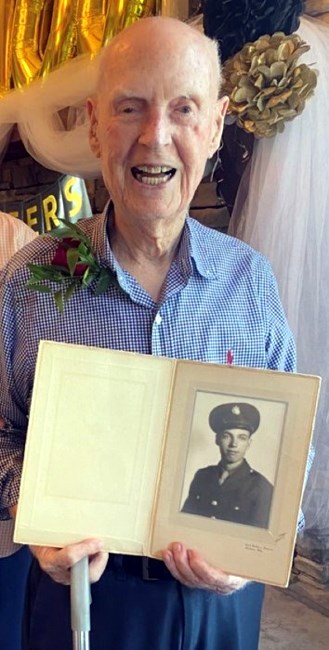 Luther Lee Hall, 100, a resident of Montgomery, AL, passed away Sunday, January 15, 2023. Graveside services with military honors will be Saturday, January 21, 2023 at 11:00 am at Greenwood Cemetery. Mr. Hall was born in Flat Rock, AL and lived most of his adult life in Montgomery. He is preceded in death by his wife Christine Murchison Hall and his parents Irvin R. and Eunice Beal Elder Hall. He is survived by his beloved children Martha Hall and Timothy Hall (Jane), his seven grandchildren Michelle Gaynoe Benzinger (Chris), David Gaynoe, Angela Gaynoe Dennis (Bobby), Carolyn Gaynoe Bradshaw (Murphy), Brooks Hall Handley (Nick), Timothy Hall (Megan) and Jordan Hall and twelve great grandchildren. Mr. Hall served in World War II in England and in the Korean War. He retired from the Alabama Air National Guard at the rank of Colonel and then worked for the Civil Service at Maxwell Air Force Base and the Alabama Public Service Commission. He started Hall Consultants, Inc. upon retirement and loved being in and on Lake Martin. He and his wife were faithful members of St. James and Aldersgate Methodist Church where he served as a lay minister and taught Sunday school for years. In lieu of flowers, please make memorials to your favorite charity in his name. Leak Memory Chapel directing Fond memories and expressions of sympathy may be shared at www.Leak-MC.com for the Hall family.
See more See Less

In Memory Of Luther Lee Hall