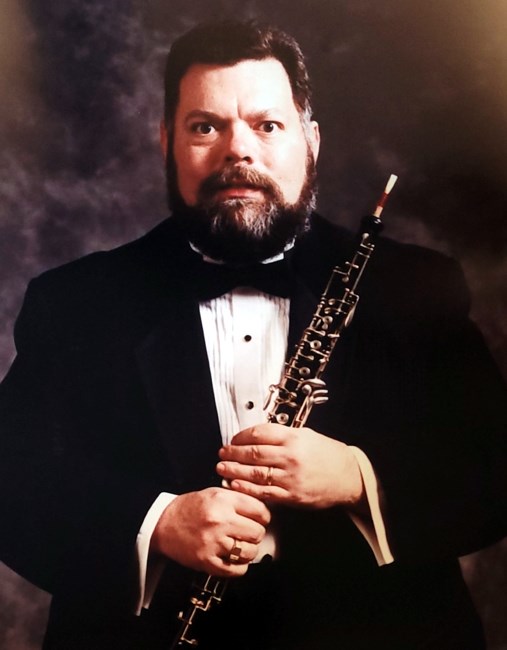 Dr. John Williams Goodall of Nacogdoches passed away August 2, 2022, in Nacogdoches at the age of 69. He was born February 7, 1953, in Charlottesville, Virginia, to parents Lury W. Goodall and Marjory (Rea) Goodall. Dr. Goodall was a member of the Stephen F. Austin State University faculty since 1980 where he served as oboe professor, associate dean, Interim Dean of the College of Fine Arts, and Interim Director for the School of Art. He was the first to hold the title of Associate Dean of Fine Arts. There, he continued to serve as the Programming and Development Officer for the college, booking the visiting artists on the University Series and obtaining sponsorships for various events. Dr. Goodall obtained his Bachelor’s Degree from East Carolina University, his Master’s Degree from Kent State University, and his Doctorate from the University of North Texas. When he was finished with his Doctorate Degree, he gave his parents a letter stating, “I could never thank you enough for all your help. Thank God I don’t have to go to school anymore. Love, John.” During his music career, he was a founding member of Stone Fort Wind Quintet, where he performed across the nation. He performed with the Orchestra of the Pines and with several symphonies across East Texas and Louisiana. He was the principal oboe with East Texas Symphony in Tyler for several years and served as the artistic director of the Chamber Music in the Pines Festival. On August 18, 2007, John married Dr. Violet Rogers. They bought a beautiful house together and enjoyed making their home. John’s family grew to include two step-daughters, where he stepped into a father-figure role. This role included attending high school programs, ballet recitals, and graduations. John also enjoyed golfing and playing his oboe. Dr. Goodall was preceded in death by his parents; and wife, Dr. Violet Rogers Goodall. He is survived by his brother, Lury W. Goodall, Jr. and wife Barbara of Myrtle Beach, South Carolina; step-daughters, Stephanie Hornsby and husband Eric of Douglass, Texas and Jennifer Stoner and husband Kyle of Friendswood, Texas; nephew, Lee Goodall and wife Beca of Christiansburg, Virginia; and grandchildren, Gwendolyn Hornsby, Karen Stoner, and Andrew Stoner. A visitation will be held at 9:00 a.m. on Friday, August 5, 2022, at Cason Monk-Metcalf Funeral Home with the funeral service immediately following at 10:00 a.m. officiated by Dr. Jerry Jones. Interment will follow at Rock Springs Cemetery. Serving as pallbearers will be Dr. Gary Wurtz, Dr. David Campo, Dr. Andy Parr, Kyle Stoner, Eric Hornsby, and Matt Watson. Honorary pallbearers will be Fred J. Allen and Dr. Charles Gavin. Arrangements are under the direction of Cason Monk-Metcalf Funeral Directors in Nacogdoches.
See more See Less