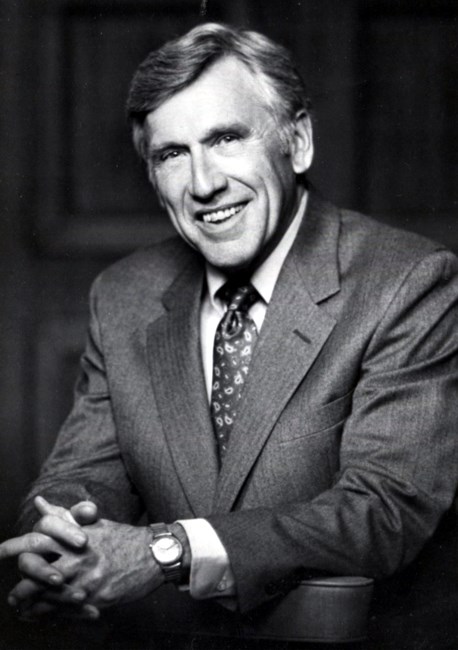 Roy Morris Blake of Nacogdoches passed away March 4, 2017, at his home at the age of 88 years, 11 months, and 4 days. He was born March 29, 1928, in Nacogdoches, the youngest of six children of Lynn T. and Pattie Lee Hall Blake. He was a member of a pioneer East Texas family, being the great-grandson of Judge Bennett Blake whose footprints are stamped across the pages of Texas history. Roy graduated from Nacogdoches High School in 1945 and attended Texas A&M University one year before entering the U.S. Navy. He returned to Nacogdoches and graduated from Stephen F. Austin State University in 1950. On June 28, 1949, he married Mae Deanne Goodwin of San Augustine. They had five children. He was preceded in death by his parents; his five siblings; and wife, Mae Deanne Blake. Survivors include his five children, Martha Muckleroy and husband Steve, Roy Blake, Jr. and wife Jocelyn, Kaki Nelson and husband Ricky, Ben Blake, and Mary Ann Beckendorf and husband Michael. He is also survived by his eight grandchildren, Ann Sheppard and husband Zac, Blake Chamness, Scott Muckleroy and wife Kathryn, Matt Muckleroy, Francis Blake, R.M. Blake, III, Catherine Blake, Austin Beckendorf and great-granddaughter Natalie Sheppard. He is also survived by his two sisters-in-law, Faye Blake and Nell Blake. Mr. Blake was a member of the First United Methodist Church and the Open Door Sunday School Class. His distinguished career in public service began early in 1951 as he completed his brother Bennett’s term as District Clerk. He served on the Nacogdoches City Commission for three terms beginning in 1965. He was elected to the Texas House of Representatives in 1972 and served there until 1977, was elected to the Texas Senate in 1978, serving until 1989. While in the Senate, he served as chairman of the Senate Administration Committee and numerous other important committees. Senator Blake authored bills which would be important for many years. He was elected President Pro Tem of the Senate, and his Governor for a Day celebration was observed October 17, 1987. In 1963 he established Roy Blake Insurance Agency. Previously he was a partner in Blake Middlebrook and Darby Insurance and participated in ownership and management of other business ventures. Senator Blake’s Civic service included serving as president of Nacogdoches Jr. Chamber of Commerce, Nacogdoches County Chamber of Commerce, Piney Woods Country Club, Booster Club, and Region 16 Texas Municipal League. He served as a Director of Fredonia State Bank, Stephen F. Austin State University Foundation, and Rotary Club. He also served as a member of the SFASU Board of Regents. He was recognized as Nacogdoches Chamber of Commerce Citizen of the Year, Rotary Club Paul Harris Fellow, and Texas Legislator of the Year. Throughout his career as a public servant, Roy M. Blake was more of a statesman than a politician. Following his great-grandfather’s footsteps, Roy made a difference for the people of the State of Texas and particularly for the citizens of Nacogdoches. The family would like to thank his very special caregivers, Johnnie M. Brinson, Trina Ruth, Martha (Cal) Tolbert, and Emma Titus. They also extend their thanks to Hospice of East Texas for their special care. Funeral Services are scheduled for 10:00 a.m. Wednesday, March 8, 2017, at First United Methodist Church, 201 E. Hospital Street in Nacogdoches, with Dr. Jeff McDonald officiating. Interment will follow at Sunset Memorial Park. His beloved grandchildren will serve as honorary pallbearers. Friends and family are invited to visitation from 5:00 – 7:00 p.m. Tuesday, March 7, 2017, at Cason Monk-Metcalf, 5400 North Street in Nacogdoches. The family suggests that memorial contributions be made to Hospice of East Texas or Love Inc. Online condolences may be left at www.casonmonk-metcalf.com Services are under the direction of Cason Monk-Metcalf Funeral Directors, Nacogdoches.
See more See Less

In Memory Of Roy Morris Blake