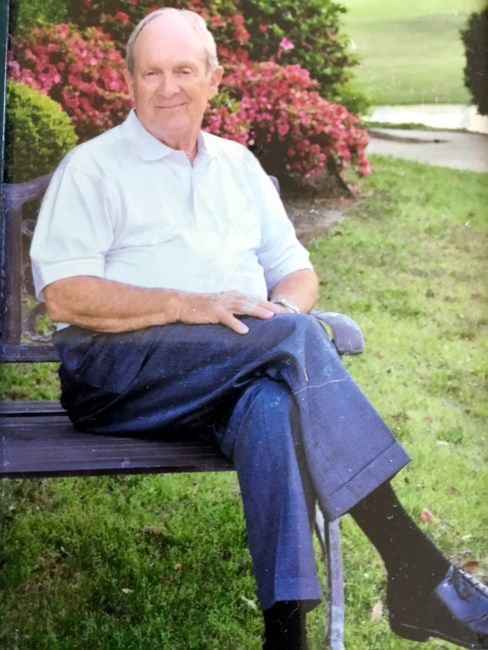 Wallace Reed Donahoe was born August 24, 1935, in Chireno, Texas to Lillian and Bennie Donahoe. He met his Lord and Savior peacefully on July 27, 2022, surrounded by his loving family. Wallace grew up in the Nacogdoches area with his parents and his siblings ‒ Beverly, Mary and Winford Donahoe. Following graduation from Nacogdoches High School, he attended Stephen F. Austin University in Nacogdoches, Texas and Centenary College in Shreveport, Louisiana. He met the love of his life, Betty Lou Cates of Mt. Enterprise, Texas in 1956 and knew immediately that Betty was going to be his companion in life. After a short courtship, they were married in Houston, Texas on June 21, 1957. Throughout 65 years of marriage, Wallace and Betty celebrated many wonderful memories together. They called both Shreveport, Louisiana and Houston, Texas home. Wallace worked as an accountant in the oil and gas industry for 33 years before retiring to enjoy golfing, hunting, fishing and spending time with his family. He was deeply devoted to the church and spent many years as a member of Spring Baptist Church. He is survived by his wife, Betty; his sister Beverly Payne; his children Stan (Cathy) Donahoe, Pattie (Joe) Stephens, Kathy (Mike) Cantley and Shanon (Tommy) Shumpert; his grandchildren Jessica (Bart) Dobson, Clint (Melinda) Cantley, John Bird, Candace Counts, Caitlin (James) Rollins, Lisa Speights, Curtis (Andy) Donahoe, Tyler Shumpert, Hayden Speights and Layne Shumpert; his great grandchildren Peyton Cantley, Braxton Cantley, Macie Dobson, Jewel Bird, Jaden Bird, Jesse Bird and Everett Counts; and numerous nieces and nephews. The family will be accepting visitors on Monday, August 15 at 1:00 p.m. at Cason Monk-Metcalf Funeral Home (5400 North Street Nacogdoches, Texas 75965) with funeral services to follow at 2:00 p.m. Interment will follow the service at Sunset Memorial Park Cemetery.
See more See Less

In Memory Of Wallace Reed Donahoe

Send flowers in the next 5 hours for guaranteed delivery.