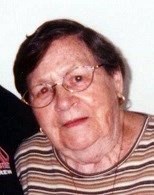 Mrs. Stevens was a seamstress, and she also enjoyed playing bingo and gardening. Mrs. Stevens served in the United States Navy as a Seaman First Class in WWII while stationed in Washington D. C. She was also a member of St. Patrick’s Church in Nashua.

A funeral service will take place on Friday July 8, 2016 at 10:00AM in the Zis-Sweeney Funeral Home, 26 Kinsley St. Nashua. Burial will immediately follow at St. Patrick’s Cemetery, Derry Rd. Hudson.

In Memory Of Alida M. Stevens