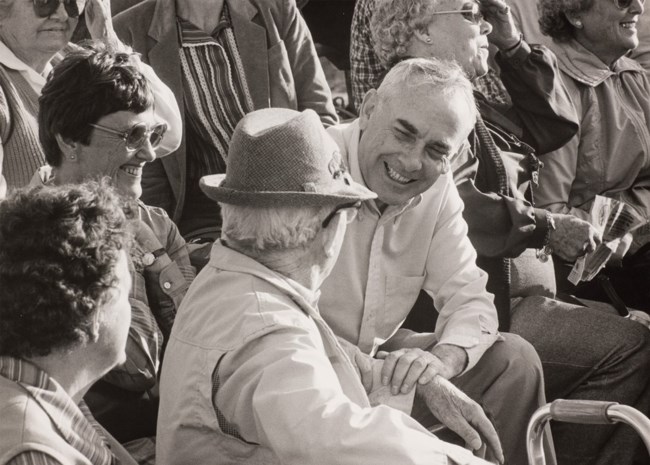 Arthur Stewart Hancock was born in 1926 in Peoria, Illinois, to Canadian immigrants Clarence W. and Edith Stewart Hancock. He learned early that listening well and with good humor was the secret to enduring friendships. Throughout his 96 years, Art cherished good friends and great stories (many of which were true). As a youngster, Art took his first of many U.S. and Canadian Boundary Waters canoe trips. He would return to the North Woods for his honeymoon, family vacations, and extended inspections of prospective in-laws. Paddling Quetico wilderness lakes into his mid-70s, he inspired his family’s enduring love of the outdoors. At 12, Art went down the Mississippi River to New Orleans as a riverboat deckhand, working in an educational solo stroll down Memphis’s Beale Street (a walk that ended prematurely when an alarmed shipmate escorted him away from the nighttime fun and back onto their boat). At Peoria High School, Art caught the eye of Charlotte Sutton, no doubt thanks to the charms headlining his senior class entry in the 1946 Peoria High annual: “Art Hancock,” it read. “Popular, Debonair.” It was still wartime, so Art was soon aboard the U.S.S. Boxer as a Navy airplane mechanic. Once safely back in civilian life, he earned a degree in advertising journalism from the University of Iowa. Art liked to say he learned important lessons in those years: avoiding sailor tattoos and balancing big trays without dropping full plates as a waiter in a college-town café. In 1951, Art married his beloved Charlotte. Ever after, he’d say he owed every success to Char’s belief in him. After a mercifully short stint with a manufacturer of ice-making machines (where sales presentations depended on stuffing ice into balky prototypes before prospective customers arrived), Art moved his young family South to Nashville and his calling: managing advertising and marketing for Jack Daniel’s Distillery. Art soon got sage advice from one of Jack Daniel’s great nephews. “Go to Lynchburg,” he later recalled Hap Motlow instructing. “They’ll learn ya how to hang around.” The Lynchburg lessons took. As an advertising mentor put it, Lynchburg helped Art perfect his natural gift for “the art of talking with, rather than at people.” His children and grandchildren and in-laws alike say their “Artie” listened as if they were the most important person in the room. From 1954 to 1991, Art oversaw what has been hailed as America’s longest-running ad campaign. Jack Daniel’s iconic black-and-white “postcards” did more than sell whiskey. They celebrated relationships and inspired new ones. After seeing a sepia photo of a town band outfitted by Mr. Daniel, Art convinced the company to create and fund Mr. Jack Daniel’s Original Silver Cornet Band. It would be successful enough to tour internationally for decades, record multiple albums, and star in national TV specials. Art’s work made people around the world feel real connections with that tiny place nestled in the hills and hollows of Tennessee. The man considered the 20th Century’s “father of Advertising,” David Ogilvy, once wrote Art: “The more I see of liquor advertising, the more I admire yours. If there is a better campaign in your industry, I have never seen it. Indeed, I would rank it among the half-dozen best campaigns in the history of advertising.” In Nashville, Art and Char raised four happy children into happy adulthood: retired insurance adjuster Susan Holmes (Bob) of Williston, FL; Lynchburg Hardware & General Store marketing maven turned preschool music teacher Julie Armistead (John) of Charlotte, NC; design engineer turned college physics instructor Steve (Lee) of Sewanee, TN, and Episcopal priest Art of White Bear Lake, MN. Art and Char doted on their thirteen grandkids and three great grandkids scattered from Alaska to North Carolina, Minneapolis to Boston, and Scotland and Spain. Fond memories and expressions of sympathy may be shared at www.marshalldonnellycombs.com for the Hancock family.
See more See Less

In Memory Of Arthur Stewart Hancock