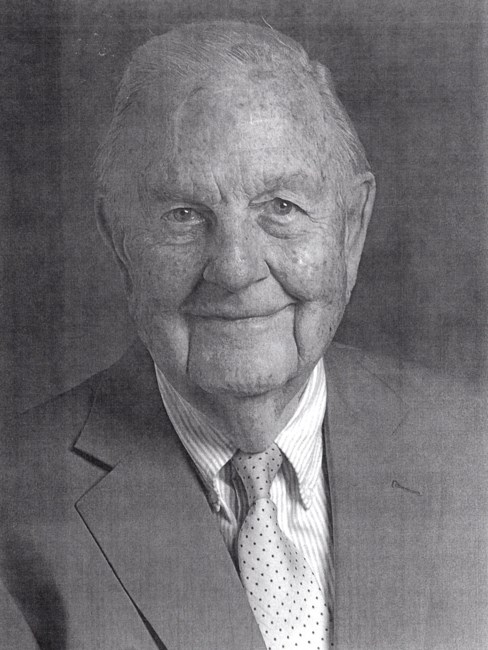 James Orin Bass passed away on May 22, 2019. He was born in Hendersonville, TN, on July 12, 1910, to Francis Marion Bass and Sadie Dunn Bass, attended Tarbox elementary school, and graduated from Montgomery Bell Academy in 1928, and the University of the South in 1931. He graduated from Harvard Law School in 1934 and returned to Nashville to join Bass, Berry & Sims, the law firm his father had started in 1922 with F. A. Berry and Cecil Sims. He led the firm for many years both in active practice and later as a mentor and loyal supporter of his many younger colleagues. He was an outstanding lawyer, a member of the American College of Trial Lawyers since 1964, and a former President of the Nashville Bar Association. He represented Davidson County in the Tennessee House of Representatives 1936-39 and served a term in the Tennessee State Senate 1940-42. He joined the U.S. Army in 1942, graduated from the Command and General Staff School in Leavenworth, Kansas, and served as Judge Advocate on the staff of General Terry Allen, Commander of the 104th Infantry Division, which fought as a part of the U.S. First Army and the First Canadian Army in France, Belgium, Holland, and Germany. He attained the rank of Lieutenant Colonel, and was awarded the Bronze Star for his service. Following VE Day, the 104th was sent to the west coast in preparation for the invasion of Japan, where it had an assigned shipping date when the war ended. Returning to Nashville following Japan’s surrender, he along with his brother, Francis M. Bass, Jr., rejoined Bass, Berry & Sims, helping to guide what was then a six man firm into an era of expansion and growth. The firm is now composed of more than 275 attorneys with offices in Memphis, Knoxville and Washington, D.C., as well as Nashville. In 1963 Mr. Bass was asked by Mayor Beverly Briley to chair a newly formed Metro Human Relations Committee, a group of community leaders which negotiated the peaceful desegregation of lunch counters and other facilities in Nashville. Mr. Bass was a loyal, long time member of First Presbyterian Church, which he regularly attended until shortly before his death. As he passed the age of 100, the church service closest to his birthday included an enthusiastic singing of “Happy Birthday Big Jim.” He regarded his fellow church members- like the members of his law firm- as family. As he was to all others, he was to his family as well. Loving and beloved, he set a wonderful example of excellence and gentleness to be followed. Mr. Bass married the former Susanne Warner in 1937 and they enjoyed a devoted and blessed life together until her death in 2000. He was predeceased by his brother, Francis M. Bass, Jr., and his sister, Mary Blackman Bass Phillips. He is survived by children James Orin Bass, Jr. (Liz), Edwin Warner Bass (Madge), Francis M. Bass II (Allison), and Susan Bass Bowen; grandchildren Nancy B. Cox (Robert), Atlanta, Susanne B. Young (David), James O. Bass III (Candy), E. Warner Bass, Jr., Elizabeth B. Lamar (Howard), John G. Bass (Felicia), Margaret B. Tyler (Bo), Francis M. Bass III (Trisha), Caroline Carter Bass, James N. Bowen (Laura), and J. Scott Bowen, Jr. (Amanda), Signal Mountain; 27 great grandchildren; and one great great grandchild; and by nieces Ann Phillips Harmer and Milbrey Waller Andrews. The family extends sincere gratitude to caregivers Mary Akhtarhavari, Ruth Keesee and Betty Montgomery. A funeral service in celebration of Mr. Bass’s life will be held at First Presbyterian Church, 4815 Franklin Road, on May 30, 2019 at 2:00 p.m., preceded by a visitation beginning at noon in the church’s Courtenay Lounge, and followed by burial in Mt. Olivet Cemetery. In lieu of flowers, the family asks that memorial contributions be made to Friends of Warner Parks, 50 Vaughn Road, Nashville, TN 37221; Montgomery Bell Academy, 4001 Harding Road, Nashville, TN 37205; University of the South, 735 University Avenue, Sewanee, TN 37383; First Presbyterian Church, 4815 Franklin Pike, Nashville, TN 37220.
See more See Less

In Memory Of James Orin Bass