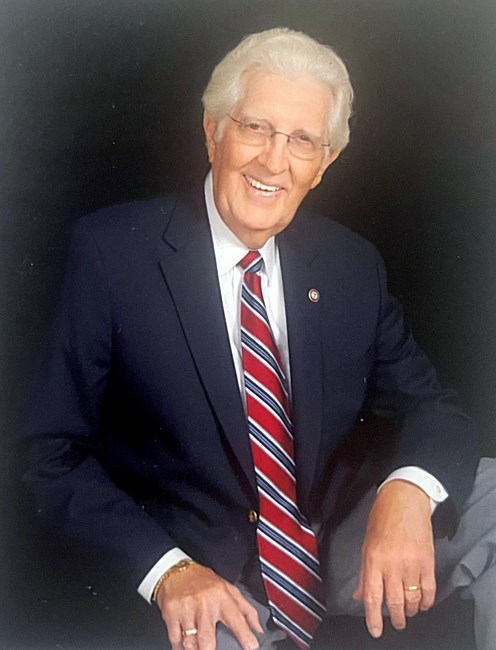 James Barnett Carter, age 94, passed away on January 20, 2023. He was born in Rocky Fork in Rutherford County, Tennessee to the late Benjamin Franklin and Mary Kelton Carter. James was a graduate of Smyrna High School and received BA and MA degrees from MTSU with further graduate study at UT Knoxville and Peabody College of Vanderbilt University. James married Betty Lou Sisk of Lebanon, Tennessee in 1955. They were married for 67 years. After graduating from high school, James attended Bowling Green Business University before entering the Navy. He served in the Navy from 1948 to 1952 mostly on heavy cruisers and destroyers in the South Pacific during the Korean War. After receiving his BA degree from MTSU, he spent time as a staff announcer at radio station WDBL in Springfield, Tennessee, before returning to MTSU to complete his MA degree and begin his career as an educator in Nashville. He began his teaching career at Shwab Elementary School before becoming Assistant Principal at Cumberland High School, Isaac Litton High School, and Madison High School. After Madison High School, he was recruited by the Tennessee State Department of Education for two years to evaluate principals and supervisors, state wide, in the Career Ladder Program. James then returned to Hunter’s Lane High School as Senior Principal and Director of Athletics. After retiring from Metro Public Schools in 1990 he spent five years at Davidson Academy before entering full-time retirement. James was a lifetime member of the National Education Association and The Tennessee Education Association and was a member of the Metro Nashville Retired Teacher’s Association serving as President in 2000. In addition to his parents, he was preceded in death by a daughter Betty Barnetta Carter and a brother Carl Franklin Carter. James is survived by his wife, Betty Lou Sisk Carter, and by sons James Clayton Carter (Karlene) of Kingsport and Myron Thomas Carter (Nancy) of Knoxville and daughter Marietta Lucille Carter of Nashville; by granddaughters Katie Carter Lambert (Chris) of Kailua, Hawaii and Leah Carter of Knoxville and by grandsons Luke Carter of Knoxville, Kelton Carter (Callan) of Nashville and Andrew Carter (Taylor) of Salt Lake City, Utah and great grandsons Finley Carter and Remy Carter of Salt Lake City. He is survived by a sister, Mrs. Ruth Hudnall of Smyrna, Tennessee. James had 6 nieces and 3 nephews. A special recognition is given to a long time family friend, Mrs. Blanche Pearson. James was raised in the Methodist Church. As an adult, he was an active member of Inglewood Baptist Church and Goodlettsville First Baptist. Since 2006 he has been a member of Woodmont Baptist Church. James enjoyed working in his yard and being a dog owner through the years. He was a lifetime Vol fan. A gathering of family & friends for James will be held Saturday, January 28, 2023 from 12:00 PM to 2:00 PM at Woodlawn-Roesch-Patton Funeral Home & Memorial Park, 660 Thompson Ln, Nashville, TN 37204. A celebration of life will occur Saturday, January 28, 2023 at 2:00 PM in Dignity Hall with Woodmont Baptist Pastor, Dr. Nathan Parker. A graveside service will occur Saturday, January 28, 2023 at 3:00 PM at Woodlawn Memorial Park with Military Honors by US Navy. The family gives their heartfelt appreciation for the concern, care and compassion shown James and Betty by Alive Hospice. In lieu of flowers, the family requests any donations be made to “Alive Hospice in Memory of James Carter”, 1718 Patterson Street, Nashville, TN 37203. Fond memories and expressions of sympathy may be shared at www.Woodlawn-Roesch-PattonFH.com for the Carter family.
See more See Less

In Memory Of James Barnett Carter