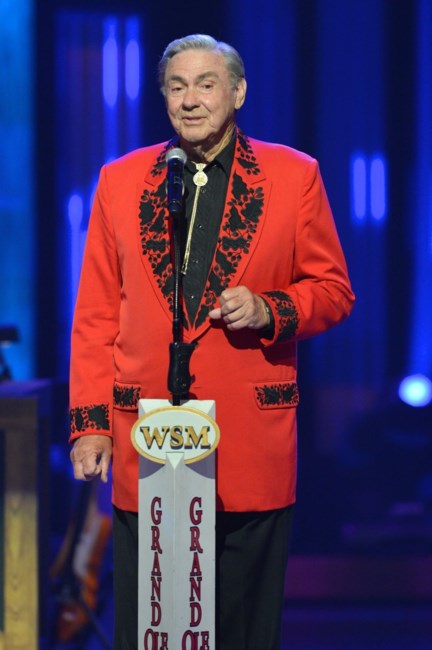 JAMES EDWARD "Jim Ed" BROWN The funeral service for Grand Ole Opry member, Jim Ed Brown will take place on Monday, June 15, 2015 at 10:00 a.m. at the Ryman Auditorium in Nashville, Tennessee. The service is open to the public with doors open at 9:30 a.m. Entombment will immediately follow at Woodlawn Memorial Park, 660 Thompson Lane and is also open to the public. Visitation over the weekend is private for family and close friends. Jim Ed passed away on June 11, 2015 at Williamson Medical Center in Franklin, Tennessee. at the age of 81, after a battle with cancer. He is survived by wife Becky Brown; daughter Kim Corwin and her husband Dr. Michael Corwin; son James Edward Brown Jr. and his wife Leigh; grandchildren Isabella Brown, Hampton Brown, Oliver Brown, Genevieve Brown and Catherine Corwin. Jim Ed became a member of the Opry on August 12, 1963 and made his last appearance there on April 11, 2015 performing “In Style Again” and “The Three Bells.” Jim Ed Brown had the distinction of topping the charts as a member of a trio, a duo, and as a solo artist. He also had one of the smoothest singing voices ever put on record. One of five children of a struggling Arkansas lumberman and his wife, a young Jim Ed and his family gathered around the family's battery-powered radio to listen to the Grand Ole Opry on Saturday nights. Jim Ed and his older sister Maxine began appearing on local radio while Jim Ed was still in high school. By his second year in college, he and Maxine were regulars on the Barnyard Frolic on Little Rock radio station KLRA. Their first hit, "Looking Back to See," became a country hit in 1954. The next year, younger sister Bonnie joined them and they became The Browns, scoring another Top 10 hit with "Here Today and Gone Tomorrow." The group signed with RCA in 1956 and quickly notched two more hits, "I Take the Chance" and "I Heard the Bluebird Sing." After a two-year stint in the service, Jim Ed joined his sisters again, and in 1959 they hit with "The Three Bells," topping the country chart for 10 weeks and the pop charts for four weeks. Follow-up singles "The Old Lamplighter" and "Scarlet Ribbons" were pop-country hits as well. The Browns joined the Opry in 1963, but by the mid-'60s Bonnie and Maxine decided to retire. Jim Ed went solo and scored hits throughout the next two decades, including the now-classic, "Pop a Top." In the 1970s, Jim Ed teamed with Helen Cornelius to become one of country music's most successful duos. The pair topped the charts with "I Don't Want to Have to Marry You" in 1976 and were named Country Music Association Vocal Duo of the Year in 1977. In addition to hit singles as a member of a group, a duo, and as a solo act, Jim Ed also shared his style of country music as both host and guest star of innumerable television and radio series and special broadcasts. Earlier this year it was announced that Jim Ed Brown and The Browns had been elected to the Country Music Hall of Fame.
See more See Less