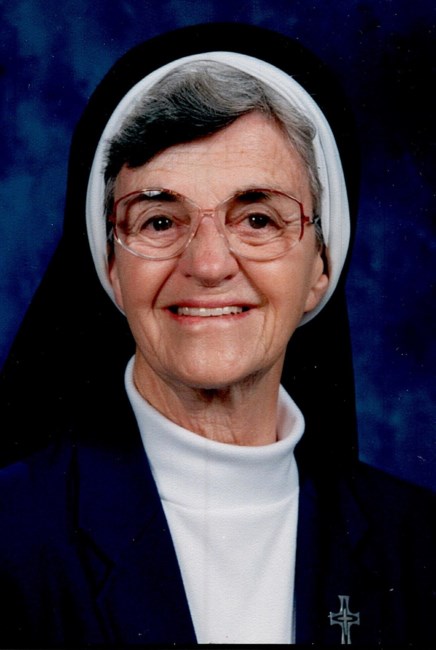 Sister Maris Stella Mogan, RSM, died peacefully Monday morning, April 18, 2022. Sister died at Mercy Convent in Nashville, Tennessee after an extended illness. A Sister of Mercy for 68 years, she was 90 years old. She was preceded in death by her parents, Joseph and Helen Mogan; her siblings, Dr. Edward Mogan, Dr. Joseph Mogan, Catherine Childs, Dr. Thomas Mogan, John Mogan and Sister Thomasetta Mogan, RSM. She is survived by her niece Cathy Childs Matteson (Michael); along with numerous other nieces and nephews. Sister held positions in education in many Catholic schools in Tennessee. She served in health care at St. Mary Medical Center in Knoxville, Tennessee. She had a special concern for the poor and homeless and was known as the “Angel of Mercy.” While in Knoxville, she also teamed up with Peyton Manning in several award-winning commercials for St. Mary Medical Center. When Sister retired, she visited the homebound and helped those in need. She remembered them in a special way in her prayer. She contributed significantly to the community life at Mercy Convent. Her commitment to God was reflected by the motto in her ring,” Thy Will Be Done”. She is remembered for her love, her smiling face and her generosity to those in need. A private funeral will be held at Mercy Convent in Nashville, Tennessee, followed by burial at Calvary Cemetery. . Fond memories and expressions of sympathy may be shared at www.marshalldonnellycombs.com for the Mogan family.
See more See Less