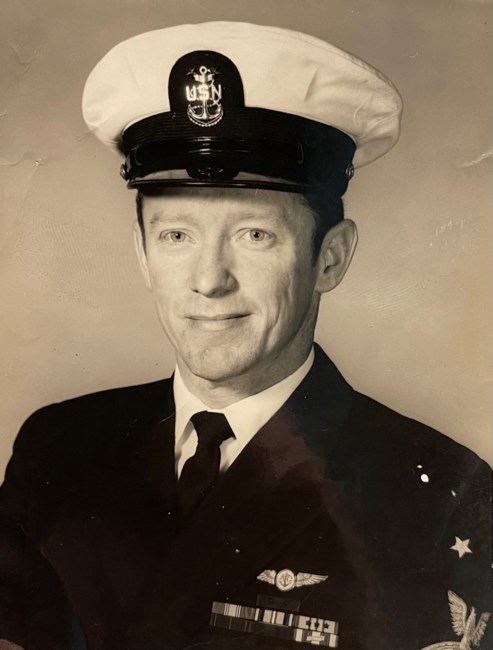 Ronnie V. Garren, age 82, of New Bern, North Carolina passed away on Saturday, January 22, 2022. Born in Greenville, South Carolina, Ron entered the military and served in the U.S. Navy for 20 years before retiring at the rank of Senior Master Chief. Following his military career he began working in civil service as a Personnel Officer, first at Cherry Point Marine Corps Air Station, and then at Baumholder, Darmstadt, and Heidelberg Army bases in Germany. Upon returning from overseas, he continued his civil service at Ft. Rucker, Alabama, where he retired. He loved to play golf, snow ski, do crossword puzzles and travel around the world with his wife, Betty. He was preceded in death by a brother, Dr. Bill Garren, formerly of Spartanburg, SC. He is survived by his loving wife of 42 years, Dr. Betty A. Garren of the home; four children, Rebecca Ann Thrailkill, Patrick Garren (Heidi), David Garren (Marian), and John Garren (Robin), all of Jacksonville, Fla.; two stepchildren, Keith Tyndall (Debbie) of Bridgeton and Kim Lewis (David) of Gloucester; brothers, Michael Garren (Sandy) of Virginia Beach, Va. and Tim Garren (Barbara) of McLean, Va.; sister, Ann Harvey of Spartanburg, SC; and sister-in-law, Ruthie Garren of Spartanburg, SC; and many grandchildren. Friends are invited to join the family for a memorial service at 3 p.m. on Saturday, January 29, 2022 at Cotten Funeral Home with Pastors Tim Whealton and David Brosnan officiating. The family will receive friends following the service at the funeral home. Arrangements are in the care of Cotten Funeral Home & Crematory.
See more See Less

In Memory Of Ronnie V. Garren