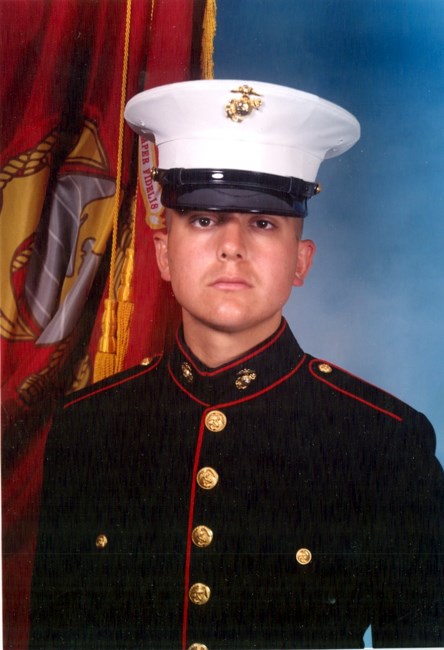 Christopher J. Parra November 13, 1984 – January 26, 2021 The world has lost a great man. Christopher James Parra was born on Nov. 13, 1984 at Lackland AFB, TX to Fernando Parra and Valeri (Parra) Escobedo. He passed away suddenly Jan. 26, 2021 at his home in Spring Branch, TX. He is survived and will be deeply missed by his loving and supportive wife of 15 years, Carrie (Weber) Parra and their children, Christopher, Caeli, Caleb, Catherine and Conrad (CJ), parents Fernando Parra, Valeri Escobedo and Stephen Escobedo, brother Michael Parra and family, grandparents Richard and Sandy Dunsmore, Kenneth and Bonnie Hall and Frank Escobedo. He is preceded in death by grandmothers Lucy Parra and Mildred Escobedo. Chris had a servant’s heart from a young age and spent countless hours of community service in high school. After graduating from Judson High School he enlisted into the Untied States Marine Corps. Shortly after bootcamp he married his sweetheart on Dec. 19, 2005 in Pipe Creek, TX. He served 9 years as an Infantryman and Arabic Linguist with three combat tours in Iraq and Afghanistan. He was honorably discharged at the rank of Sergeant in 2014 leaving behind a legacy of mentorship and sacrifice. Returning home to Converse, TX he attended AACOG Law Enforcement Academy. He joined the Comal County Sheriff’s Office in July of 2015. He started as a patrol officer on Delta Nights. He was promoted to Detective in the fall of 2019. He worked tirelessly to train new officers and further his own education. He graduated from San Antonio College in Dec. 2020 with an Associates Degree in Criminal Justice. He is remembered by the citizens he served as being kind and professional, leaving each person feeling a little safer than before. His fellow deputies greatly mourn his loss and will miss his wit and sense of humor that could make anyone smile usually when they needed it most. In his spare time he enjoyed beekeeping, being ham radio operator (W5DTP), teaching faith formation at church and learning new homestead skills with his large family on their little patch of dirt. His children particularly loved grabbing a root beer and spending one on one time with him. His love of faith, family and innate ability to teach and inspire will live in our hearts forever. A public viewing will be held on Feb. 10th at 6-9pm at St. Joseph Catholic Church – Honey Creek, 25781 TX-46, Spring Branch, TX. Holy Rosary will be held at 7pm during the viewing. Holy Mass will be held on Feb. 11th at 10am at St. Joseph Catholic Church – Honey Creek. Committal service with Full Military and CCSO Honors will follow at the cemetery on the same campus.
See more See Less

In Memory Of Christopher James Parra

Reception for Family and Friends