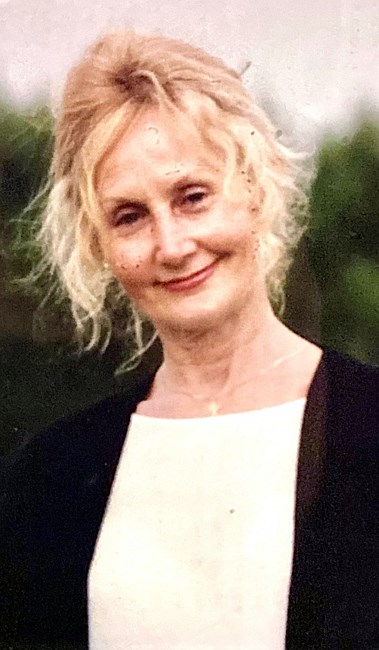 Margaret Patricia Andersen, aged 83, residing in Piermont NY, left this world for the heavenly abode on January 12th, 2023. After a 20+ year progression of dementia, she passed away in her own home with her children holding her hands. Margaret, born on March 13th, 1939, grew up in Listowel, County Kerry, Ireland, and immigrated to the United States at age 15. At the age of 25, she married Jim Andersen, and went on to have 2 children. Margaret was a devoted mother and loved by all. She loved music and dancing and creative writing. She was an exceptional beauty and was very free- spirited. In her later years she became quite a peaceful and angelic presence. She is survived by her sisters Maureen and Maeve, her brothers Jim and Ted, her two children James and Catherine, her two grandchildren Liam and Max, and many nieces and nephews. There will be a wake and service for Margaret on Saturday, January 21st from 3 to 8 pm at Higgins Funeral Home, 321 South Main Street, New City, NY. A special service with Father Tom Kunnel of St. John’s Church in Piermont will happen at 6:00 pm. This will be followed by sharings of family members and friends including musical offerings. Please note that the immediate family will be taking a break between 5 and 6 pm, but the room will remain open for viewing.
See more See Less

In Memory Of Margaret P. Andersen