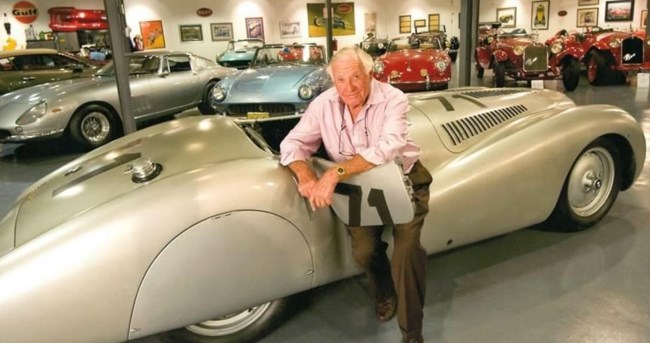 Oscar Davis, former chairman and owner of Hayward Industries, recipient of the Ellis Island Medal of Honor and legendary vintage car collector, died on Thursday, February 25, 2021, in New York City. He had just celebrated his 95th birthday. Oscar Davidovits was three when he and his family landed on Ellis Island in 1928. They settled in the Bronx, where life during the depression shaped his tenacity and ambition. Just before his 18th birthday, he left school to enlist in the army and, soon after training, was deployed overseas. Following the defeat of Germany, Davis, who was Jewish and fluent in Hungarian and German, remained in Europe, overseeing displaced persons camps where he found family members who had survived the Holocaust. Following his army service, he returned to the United States and earned a GED from Brooklyn Tech. After various apprenticeships as a tool maker, a trade he had learned from his father, he started his own small machine shop that produced specialty plastic fittings for the emerging industrial plastic piping business, an innovation used in the chemical and water treatment industries. In 1961 he sold The Oscar Davis Company, and then in 1964 he approached Irving Hayward to acquire his small metal fabrication business that is known today as Hayward Industries. Taking his expertise and background in the use of industrial plastics, he positioned the business as one of the first to engineer swimming pool products using plastic components. Through organic growth and strategic acquisitions, Hayward expanded into a global enterprise, employing more than 2400 employees worldwide, and today remains a robust leader in the swimming pool industry. He became a car enthusiast during the war, and began collecting and restoring cars in the 1950s. His passion for rare European vintage sports cars has grown over the years into a collection of over 50 cars and is recognized as one of the finest in the world. Until recently, Oscar drove his cars in the Colorado Grand and Mille Miglia, to name two notable rallies he enjoyed. He exhibited prize-winning cars at the Pebble Beach Concours d'Elegance and the Amelia Island Concours d’Elegance annually for over 30 years. He played the trumpet and was an avid listener of Big Band jazz, and remained an active member of the Friars Club until it closed last year. In 2002, Davis was awarded the Ellis Island Medal of Honor, for his distinguished achievements in business and service to the country. In 2011, he received an honorary degree from the Israel Institute of Technology (Technion), for his commitment to engineering and support for technology that advances innovative research. He had four children with his first wife Leonore Peyser. Frances, Robert, Andrew, who died in 2008, and Carol. The marriage ended in divorce in 1968. Mr. Davis is survived by his second wife, Betty, his son Robert Davis and his wife Lenore, his daughters Frances Turner and her husband Paul, and Carol Davis and her husband Joel Marcus, six grandchildren (Andrea, Karla, Jake, Charley, Isaac and Aaron) and four great-grandchildren.
See more See Less

In Memory Of Oscar DAVIS