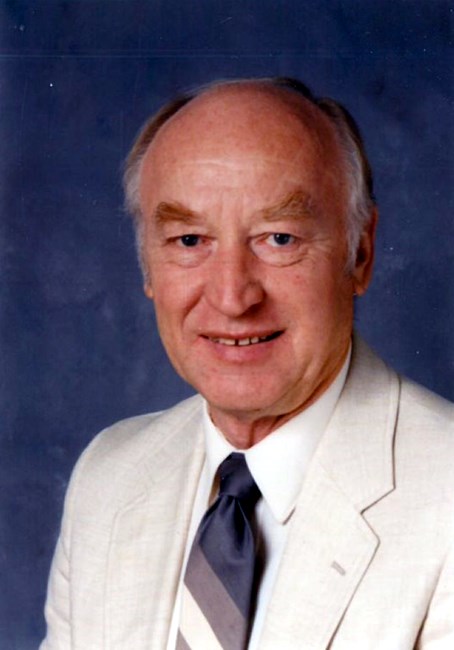 Waldo Herman Cloeter was born on April 12, 1925, third of eight children, to Rev. Richard and Martha (nee George) Cloeter in St. James, MN. He received birth into God’s family through Holy Baptism on April 26, 1925, at Immanuel Lutheran Church in Ormsby, MN. Wally confirmed his faith at St. Peter’s Lutheran Church in North Elysian, MN, April 2, 1939. Upon graduation from Waterville High School, he continued his studies at Concordia Teachers College Seward, NE where he earned his bachelor’s degree. In 1961 he received his master’s degree from San Fernando Valley State College. In February of 1948 he boarded a train in frigid Mankato, MN (temperature -27F) headed to Van Nuys, CA (a balmy 70F.) Here he met his first love, Mildred (nee Werner) whom he married on May 27, 1950. This union was blessed with four children. Wally served as principal/teacher in Lutheran Schools for over 43 years. In addition to these responsibilities he played the organ, directed choirs, worked with youth, and even drove the school bus! Congregations to which he ministered include Trinity First Lutheran, Minneapolis, MN, First Lutheran, Van Nuys, CA, Los Angeles Lutheran High School, and Canoga Park Lutheran, Canoga Park, CA. In retirement he spent a year in Bratislava, Slovakia, teaching English at the Evangelical Lyceum. Wally was blessed with love once again when he married Elizabeth Schussel on June 21, 1997. Included in the extended family were Betty’s children, Linda (Herb) Axenroth, Larry (Vicki) Schussel, Rick (Lori) Schussel, and Bob (Lynn) Schussel along with grand- and great-grandchildren. Wally is survived by his brother Hub (Diane) Cloeter, and sister Vicky (Don) Langewisch; children Janet Cloeter, Laurie (Dave) Rickards, and Philip (Judy) Cloeter; daughter-in-law, Lynn Cloeter; grandchildren, Kailee (David) Mattice, Jeremy (Sarah) O’Conner, Brian (Kelly) Rickards, Andrew Rickards, Sarah Rickards, Adrienne Cloeter, and Philip S.S. Cloeter; and nine great-grandchildren. He was preceded in death by his first wife, Mildred (1993), his second wife, Elizabeth (2018) and son Mark Cloeter (2010). But from everlasting to everlasting, the Lord’s mercy is on those who fear him. His righteousness belongs to their children and grandchildren. Psalm 103:17
See more See Less

In Memory Of Waldo Herman Cloeter