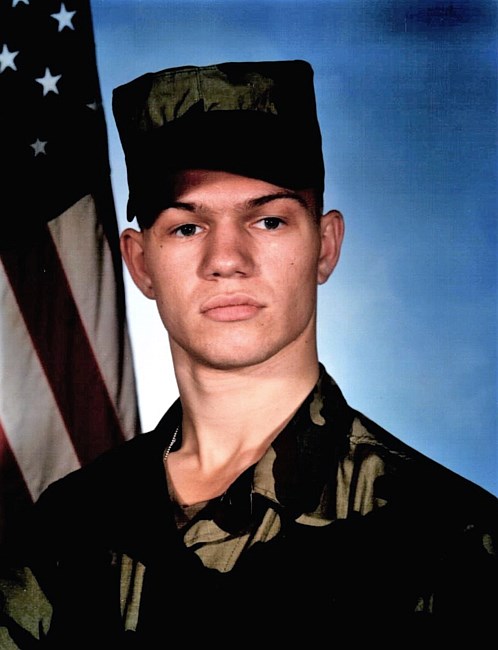 Paul E. Dickenson went home to be with the Lord on Aug 4th, 2022 after a 6 week illness. Paul was born on Easter Sunday, April 6th 1969 to Lorene & Lonnie Dickenson in Klamath Falls, Oregon. As Paul grew he loved to play sports; baseball being his favorite sport. Paul joined the Cub Scouts in Pensacola, FL Pack 1. He worked until he crossed over to Boy Scout Troop 1. As the family moved, he moved troops ending up in Troop 996 at Rock Church. Paul made Eagle Scout on June 11, 1986. Paul was the first Eagle Scout for Troop 996. He graduated from Rock Church Academy June 19, 1987. He went to Norfolk State University where he excelled in the Army ROTC program and studied Mathematics. While attending NSU, Paul met his future wife Ann, they would married on April 6th, 1991. He graduated June 1992 with a Bachelor of Science in Mathematics and was commissioned as a 2nd Lt into the Army the same day. Upon entering the US Army, he attended Jump school at Fort Benning GA and Artillery Officer training at Fort Sill, OK. He was stationed at Fort Campbell, KY. On March 13, 1995, Paul was involved in a single car accident. After twenty-four months of care and rehab at the Veterans Hospital in Tampa Florida, Paul was discharged with a left arm that did not work and left leg that was stiff. However, the Doctor said on day seven after his accident he would never get out of the bed. Over the next twenty-seven years, he was a fighter. If he wanted to do something, he would figure it out. Nothing stopped him from serving the Lord. When Paul would meet people, they were amazed at his Love of his Lord and making the most of his disability. Paul was a member of Suburban Christian Church for greater than twenty years. He was a diehard Dallas Cowboy fan, he loved to bowl, and was a member of Norfolk State Baseball Alumni. When the baseball team had home games, Paul ran the scoreboard for the past twenty years. Uncle Paul loved his nephew Grayson & Oliver very much. He enjoyed sharing nose honks with them, facetiming and playing board games. Paul is survived by his mother, Lorene Sybrandt of Virginia Beach, VA; father Lonnie & wife Liz Dickenson of Woodburn, OR; younger brother Mic & wife Angela; nephews Grayson & Oliver Dickenson of Edwards, CO. Aunt Darla Hanson of Beaverton, OR; Uncle Joe & wife Dianna Mathies of Donald, OR. Uncle Ted & Juanita Mathies of Oregon City, OR; Uncle Mike & wife Sharon Mathies of Aurora, OR; Aunt Theresa Hansen of Riddle, OR; Uncle Tracy & wife Jenine Mathies of Cloverdale, OR; Aunt Vera & husband Frank Fleckenstein of Canby, OR; and many cousins & second cousins. Paul we will miss you greatly! Paul spent five weeks at Hunter Holmes McGuire Veterans Hospital in Richmond, VA. He could not have received better care than he received at Hunter Holmes McGuire Veterans Hospital. The compassion, respect, empathy and deep care were evident in each person Paul came in contact with from housekeepers to the Medical staff. As his mother I have never seen a more caring group of people. They not only cared for Paul’s medical needs; they cared for his spiritual needs and they comforted and supported me every step of the way. In lieu of flowers, contributions in Paul's memory may be made to Fisher House Foundation of Richmond Virginia, 1201 Broad Rock Blvd., Richmond, Virginia 23249 US, www.richmondfisherhouse.org. Fond memories and expressions of sympathy may be shared at www.woodlawnnorfolk.com for the Dickenson family.
See more See Less

In Memory Of Paul Edward Dickenson