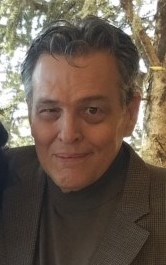 Roy Harold (Hal) Watson, 66, passed away at his home in Norman, OK on Monday, April 5, 2021, with his soul-mate Christine at his side. When Hal was working as an RN, he met Christine DiGennaro, also an RN, working at the same hospital. They shared 18 years together. Hal loved music and all things audio. He also had a passion for writing poems and short stories. As he put it, he loved “turning a good phrase”. His poetry was his everything. In fact, some of his poetry was even used in college classrooms. He wrote prolifically on the website AudioKarma under the pen name MusicHal. There he was able to indulge his love of both music and writing. In addition to Christine, Hal is also survived by his sons Blake Watson and Matt (Anna) Watson along with their mother Clarissa Watson; Christine’s children Florance (Michael) Easley, Anne (Russ) Black, Maggie (John) Carideo, Angelo (Jessica) DiGennaro, Neal (Jennifer) DiGennaro, Jennifer (Joel) May; his siblings Sandra (Johnny) Dollar, Tim (Vickie) Watson and Tammy (Steve) Brantley, as well as nephews Ken Dollar and Jeff (Kim) Brantley and nieces Julie Dollar and Emily Brantley. Hal was preceded in death by his father Roy Charles Watson, his mother Nellie Malone Watson and Christine’s son Salvatore DiGennaro. Visitation will be from 6-8pm Thursday, April 8, 2021, at Primrose Funeral Home in Norman, OK. The funeral service will be held at 10am in the chapel of Primrose
See more See Less

In Memory Of Roy Harold Watson