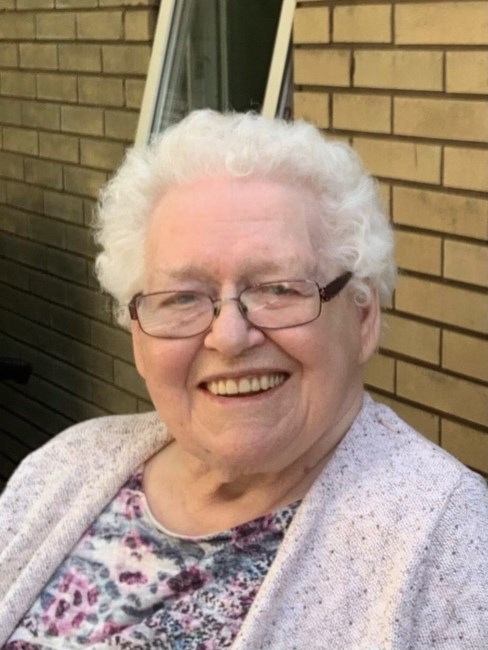 Willimina Fisher (nee Baginski) Willimina was born May 19, 1924 in Springhill, Nova Scotia. Her father, Charles Baginski was in a fatal coal mining disaster before her birth. When ”Velma” was 3 years old her mother, Annie (Hahnen) chose to move the family to Gravelbourg, Saskatchewan. That is where the 4 Baginski children joined their 5 step siblings and soon to be step father, George Bolen. The family was a set of 4 ‘”twins” and a babe on the knee. Annie and George had 5 more children to complete their family. They moved on to Sandwith, Belbutte and then on to Surrey B.C. in later years. We heard many stories of the large family and all the antics and situations the children created! Velma married William Gabriel Fisher from Duck Lake, Sask in 1944. In 1952 their son Roy joined their household. Velma’s work years were spent in hospital and care homes working in the housekeeping and dietary departments. They lived in several communities and provinces until settling in Rosthern, Sask where Bill passed in 1997. Velma chose to relocate to North Battleford in 1999 to be closer to the extended family. That was when we really got to know this Auntie and appreciate her sense of humor and interesting quirks. Velma enjoyed 16 years in her apartment in North Battleford until moving for extended health care. Villa Pascal was her home for the next 7 years. The past couple of years Velma struggled with Alzheimer's and was confined to a wheelchair but the humor still shone through. Velma is survived by one half sister, Marie Bolen (McDonald), sister in law Edie Guhl as well as numerous nieces and nephews. She was predeceased by her husband” Bill” William G Fisher, son Roy Fisher, father Charles Baginski, step father George Bolen and her mother Annie (Hahnen) Vassart-Baginski.-Bolen. Velma was also predeceased by her full siblings; Fred Baginski (Jean), Anne Baginski (Paul Borisenko, Alex Nelson) and Louisa Baginski (Roland Amos). Half siblings; Joseph Vassart, Nicolas Vassart, Rose Marie Bolen (Laroque), George Bolen (Beatrice), Joe Bolen (Juanita), and Edward Bolen (who died in childhood). Step siblings; Lawrence Bolen (Doreen). Casper Bolen (Betty). Nick Bolen (Ernestine), Annie Bolen (Bill Franson) and Clara Bolen (Jim George). A private farewell will take place January 26, 2023. Velma will be reunited with her husband and son at Blessed Sacrament Cemetery Duck Lake, Sask at a later date.
See more See Less

In Memory Of Willimina Fisher