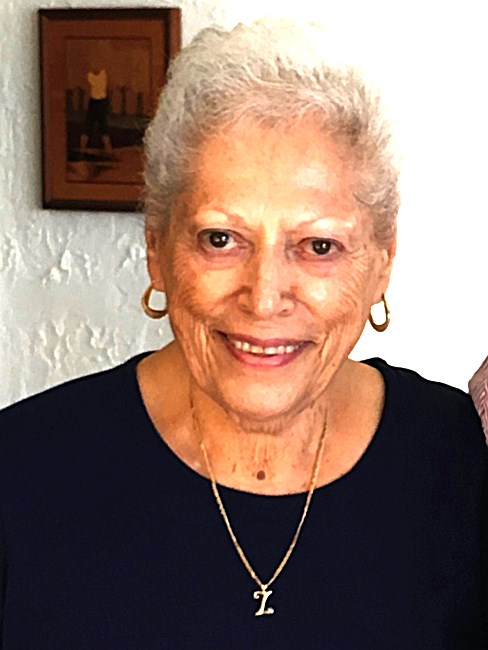 Zelda Epstein was born on May 20, 1933 in Brooklyn, New York. She attended Samuel J. Tilden High School. Upon graduation, she worked as a bank teller for many years. Zelda met her beloved husband Harry (“Hesh”) at a dance in Manhattan and the rest is history. They married on September 11, 1954. With two daughters, Rikki Susan and Randi, their family was complete. While her husband worked all day, Zelda enjoyed her role as a homemaker. When her children were in elementary school, she served as the ‘class mother’ and chaperoned all of their field trips. She also loved to volunteer, serving as President of the Sisterhood at Temple Menorah in Little Neck. When Rikki and Randi went off to college, she took a job as a bookkeeper in the garment center. After living in Little Neck, New York for many years, Zelda and Hesh retired to Boca Raton, Florida in 1991. In the warm Florida sunshine, she became active in the Boca Lago community, volunteering at Boca Raton Regional Hospital, serving as President of the Vistas at Boca Lago, spending time in the Citizen Observer Patrol (COP) program to safeguard her community, and leading various community landscaping committees. Zelda was an expert knitter and made beautiful afghans and sweaters for her family and friends that they cherish. Zelda and Hesh loved traveling, visiting places such as Russia, Romania, England, France and Italy, as well as national parks and monuments throughout the United States. With their grandchildren, they enjoyed visits to Disney World. One of the most memorable highlights was their trip to Israel with the Weiner Cousins Club, a group of cousins that met three times a year for over 40 years. After Hesh passed away in February 2020, she eagerly anticipated leaving Florida and moving in with her daughter Randi’s family in West Hartford, Connecticut. Once there, she enjoyed Zooming with family and friends, completing Sodoku puzzles, playing Rummikub, watching tv, reading novels, and spending time with her grandchildren and grand-dogter Bella. She was predeceased by her beloved husband Hesh, her sister-in-law Pearl Steinberger, her brother-in-law Norman Steinberger, her parents, Rose and David Mernick, and her brother Marvin. Zelda passed away peacefully on January 17th at the age of 88. She is survived by her daughters Randi (Bruce Bernheimer) and Rikki (Ron Shapiro); her grandchildren Carly Bernheimer, Justin Bernheimer and Garrett Shapiro; and her nephews Howard Steinberger (Karen Companez) and Stuart Steinberger (Joanne). Memorial donations in Zelda's memory may be made to: The Arc of Northern Virginia, 2755 Hartland Road, Suite 200, Falls Church, VA 22043 or www.TheArcofNova.org.
See more See Less

In Memory Of Zelda Epstein