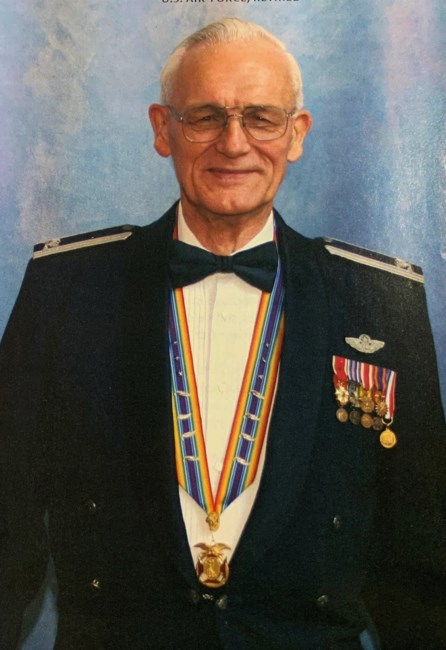 James DeElton Elmer, 86, passed away on July 14, 2020. He was born in Richland Center, Wisconsin, to Drayton Lee Elmer and Violet Evelyn (Stibbe) Elmer. Jim was a 30-year veteran of the US Air Force, accruing 9000 flying hours. His work life included door-to-door sales of fresh meat, being a farm hand for room and board starting in seventh grade, driving a truck for Green Giant, being an aide at Beloit Iron Works, working at an ice cream company, pinsetting at a bowling alley, having a meal job at the University of Illinois, and being a visual arts assistant at the U of I Agriculture Department. Jim attended eight schools during his elementary years and became valedictorian of his high school class, studying during the daily ten-mile bus ride to school. A very difficult experience was the death of his mother when she was thirty-seven—he almost dropped out of college. A big influence on Jim’s life was his membership in FarmHouse Fraternity. Another was marrying “the love of his life” Ruth. Jim earned a vocational agriculture bachelor’s degree in secondary education from the University of Illinois, and was a U of I Honor Graduate. Having taken ROTC courses, he received his commission as a second lieutenant. Graduating second in his class from navigator training, he began an assignment in RC-121s based in California. Later he became a Master Navigator. Due to his agricultural background, he was tasked to build a fence around the squadron operations building. He also completed the Arctic survival course. He volunteered to be the squadron scheduling officer; therefore, he knew in advance when he was to be on duty. Under his volunteer leadership as physical conditioning unit manager, his squadron won the base championship. The family moved to Japan, and Jim flew C-130s during the Vietnam War. His assignment to teach ROTC at Parks College of Aerotechnology (St. Louis University) led him to get his private pilot’s license. Passing the marksmanship test with a rating of Expert, he also completed water and jungle survival schools wearing a back brace. An unaccompanied tour to CCK, Taiwan (flying missions in Vietnam), led to his returning to complete his Master’s Degree at St. Louis University. During his assignment at JROTC Headquarters at Maxwell AFB, Montgomery, Alabama, he authored “The Theory of Flight” and helped write other JROTC textbooks. At Little Rock AFB, after assignments in a flying squadron, and then in a training squadron, he served as Deputy and then Base Commander. Being promoted to the rank of colonel, he was first Deputy Commander and then Commander of the Aerospace Audiovisual Service for eight years. He was honored by the non-commissioned officers of AAVS by being inducted into The Order of the Sword. After thirty years in the Air Force and retiring, he was employed by Lockheed Martin as training manager of C-130 air crew training at LRAFB. Jim’s membership in the Military Order of the World Wars was fitting as he agreed with its values respecting patriotism. He went on to help organize the Central Arkansas Chapter. He served one term as National Commander of MOWW. One volunteer activity he really enjoyed was presenting Flag Education classes to fifth graders in Central Arkansas, giving presentations to thousands of students over the years. He also was the Arkansas coordinator for the Joe Foss Institute. Being a rotating teacher of the Bob Millett Bible Class and serving on committees at Lakewood United Methodist Church were important to Jim. He organized a Bowl-a-Thon for the Methodist Men as a fundraiser. He and Ruth continued their fellowship with the Lakewood Squares square dance group after their series of class sessions concluded. Jim was a member of the Military Order of the World Wars, Military Officers Association of America, Air Force Association, Distinguished Flying Cross Society, American Legion, Veterans of Foreign Wars, Arkansas Military Veterans’ Hall of Fame, Aerospace Audiovisual Service/Combat Camera, 32nd Tactical Airlift Squadron, Troop Carrier/Tactical Airlift Association, U.S.O., charter member of the New Orleans WW II Museum, Capron/North Boone High School Alumni, Blind Bat, 815th Troop Carrier Squadron, St. Louis University Alumni, Ching Chuan Kang’s 776th Tactical Airlift Squadron “Red Lions”, FarmHouse Fraternity, and University of Illinois Alumni Association. Jim summed up his work experience with, “I always did the best job I could.” He stated that his military experiences “clarified his beliefs”. He recommended volunteering because it can open opportunities. “Plan ahead,” Jim always said. Private burial will be in the Arkansas State Veterans Cemetery. A memorial service will be held at a later date when Covid-19 restrictions allow. In lieu of flowers, donations may be made to a favorite charity. Col. Elmer is survived by Wife of 63 years, Ruth (Barkley) Elmer of North Little Rock, AR Children: Ken (Julie) Elmer of Birmingham, AL; Richard (Sherry) Elmer of North Little Rock, AR; Mary (Hugh) MacEachern of Taylor, MI; “Su” (Keaton) Smith of London, KY Grandchildren: LeighAnn Tufts of New York, NY; David (Laura) Elmer of Rome, GA; “Chip” (Brittany) Elmer of Birmingham, AL; Logan Allen of Benton, AR; Rebecca Lyles (Francesco) Bravi of Rome, Italy; Will (Iris) Lyles of Victorville, LCpl Robert Lyles of Goodfellow AFB, TX; Grant Lyles of Boston, MA; Alyn (Allyson) Smith of Lexington, KY; Ken Smith, Mary Smith, and FaithLynn Smith of Corbin, KY Great grandchildren: Elliot Elmer and Maggie Elmer of Rome, GA Brothers: Wayne Elmer of Beloit, WI and friend MaryAnn Donovan; Robert (Diane) Elmer of Roscoe, IL; Clifton (Gloria) White and Dale White of Beloit, WI Sisters: Donna Dyer of Reedsburg, WI; Karen (Tim) Schaeffer of Naples, FL; Rosie Grignon of Antigo, WI; Ramona (Jim) Rabuck and Loretta (David) Thurman of Beloit, WI Brother-in-law Bruce (Margaret) Barkley of Galesburg, IL Sister-in-law Clare Barkley of Urbana, IL Several nieces, nephews, and cousins Pre-deceased by Parents: Lee Elmer and Violet (Stibbe) Elmer Stepmother: Faith Gearing Brothers: Dick Elmer; Jack Elmer, Larry White; Philip White Sisters: infant; Doris Peterson; Sherry Banker; Carol Venrooy
See more See Less