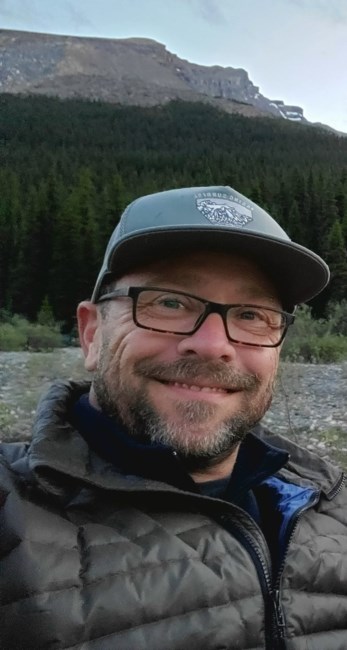 Beloved husband to Sue and outstanding father to Adam and Ryan, Brad was taken from us by an aggressive form of cancer on May 6th. Born in Calgary to David (Denise) and Audrey Collins(pre-deceased) and raised alongside sisters Corrina and Sherri-Dawn(pre-deceased) and brother Jason, Brad was cherished and vital both to his own family and to Sue’s. Brad moved to Vancouver as a young man where he attended UBC, achieving his Master’s Degree in Forest Ecology. Shortly after meeting Sue, he was welcomed not only into her family but into the family business and they settled in North Vancouver to raise their two boys and their dog Chester. Together, they worked hard to build a life filled with as many adventurous good times and good people as possible, often meeting up for ski trips or at their cabin on Reid Island. Family and friends alike are reeling from his loss, largely because he was the kind of guy who was loved so much by so many. Encapsulating Brad in a few words is an impossible task, but this is how those who knew him best describe him: A man of impeccable character, Brad was the kind of guy who did the right thing no matter what. The essential person to call if you needed help with pretty much anything: An intelligent opinion, a solid recommendation, or a strong shoulder. The kind of guy who openly adored and respected his wife and who put his family first every time. The kind of guy who took his sons backpacking in the Rockies just so he could spend more one-on-one time with them. Fiercely loyal, he was the kind of guy who truly valued his friendships, and who inspired you to be a better person. The kind of guy who always took time to appreciate nature, a gorgeous tree or a beautiful sunset. Brad was someone who loved knowledge but was never a know-it-all. He was articulate in the extreme. The kind of guy who hit the nail on the head every time, but who also listened with real intent and left room for others to speak. So very capable, he was a true man of action. The guy who did the job correctly, and then put everything away in the correct spot afterwards. The kind of guy who could grow both a beard and a front lawn that were the envy of other guys. The kind of guy who was comfortable in his own skin and had the ability to make others feel the same. Someone who always gave the warmest of welcomes. Brad had perfected the art of a good story, a strong martini, and a warm hug. The kind of guy who knew that he was living a good life with people he loved. The kind of guy who will always live on in our favourite memories…who somehow manages to make us feel incredibly grateful for all the fun times we had together despite the heartbreaking sadness of his loss. If you were lucky enough to spend time with Brad and witness his truly spectacular character, then we ask that you take a moment to make yourself a drink, and join us in a toast: To Brad Collins: He Was Our Kind of Guy. The family will plan an intimate gathering in the coming weeks. Brad has asked in lieu of flowers, to please donate to The Canadian Mental Health Association.
See more See Less